You are here: Home / City Hall / Fairview development proposal moves to next steps and other Halifax council news 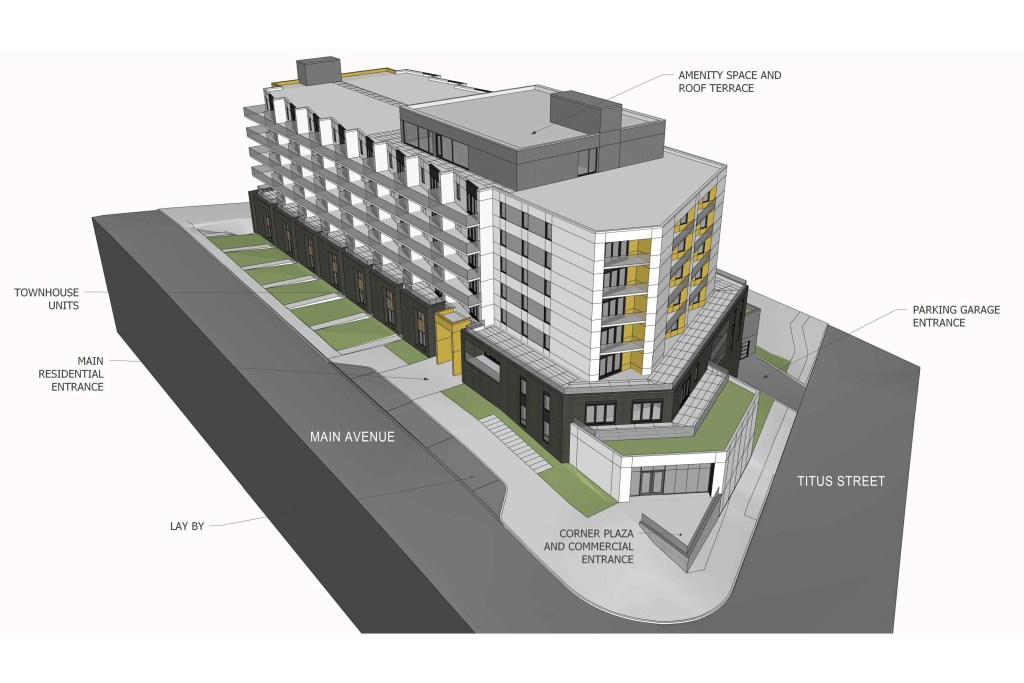 Though it’s still in early stages, a development proposal for the corner of Main Avenue and Titus Street in Fairview is moving ahead following a vote by Halifax regional council on Tuesday.

United Gulf Developments wants to build a six-storey residential and commercial building on six lots at the corner, with 119 housing units, 3,330 square feet of commercial space, and parking for 178 cars and 67 bicycles. There are currently two single-unit dwellings on the site and two multi-unit dwellings — a total of 11 homes.

Four of the lots are zoned for this kind of development, under the Dutch Village Road Mixed Use zone, but two of them fall just outside, so the developer applied for bylaw amendments to allow the proposal. The developer is asking for more height and lot coverage than permitted as of right.

In the staff report to council, planner Sean Gillis wrote “there is merit in considering the amendments.”

“The area has a mix of services, is walkable, is well served by transit; and is a good location for mid-rise, multi-unit development,” Gillis wrote.

But the councillor for the area, Kathryn Morse, isn’t convinced.

“I have some concerns about the design as it is presented so far,” Morse said.

“The big problem is the driveway, which at the moment is not actually legal.”

That’s because the parking garage empties onto Titus Street, the busier of the two streets.

“I think it needs to go back for revisions,” Morse said of the proposal on Tuesday.

Morse suggested her council colleagues vote down the recommendation so she could move an alternative to reduce lot coverage to 75% from 100%. After some discussion, she moved amendments to accomplish the same goal. She also asked for a another staff report reviewing the Dutch Village Road Mixed Use zone in general, citing concerns about lot coverage.

“If it’s 100% lot coverage there’s no room to expand the streets or make room for active transportation,” Morse said.

“I would side with you Kathryn that perhaps 100% lot coverage kind of limits what we can then expect from the right-of-way, and having that little bit of setback would be a good thing for the community as it continues to grow and evolve,” Cuttell said.

It’s the same issue Suzanne Rent wrote about in the Examiner last week, speaking with Morse:

I asked her about the concerns about those buildings at Rosedale and Dutch Village that Merchant mentioned that were too close to the existing sidewalk.

I have been coming down there recently myself to check it out and I did notice the visibility is not great around those buildings. The pedestrians are crossing very quickly in front of cars and you don’t have a lot of visibility around those two buildings. I have no idea why they were built so close to the sidewalk. In some designs it’s considered better practice to have storefronts close to the sidewalk to make for more walkable commercial area. In this case, I think the visibility could be improved.

Morse says she’d like to have city staff check out those sites with her.

Morse’s amendments, and the motion as a whole, passed.

The municipality will help property owners restore and upgrade their buildings in the Schmidtville and Old South Suburb heritage conservation districts after a council vote on Tuesday.

Heritage property owners are already eligible for municipal grants, but this program sets a much higher limit. The grants are capped at $15,000 for residential properties and $25,000 for commercial properties.

Under this new incentive program, detailed in the staff report to council, property owners will be able to access conservation grants for 50% of the project cost for exterior restoration work up to a maximum of $50,000. They’ll also be eligible for functional improvement grants to cover 15% of the cost of upgrading plumbing, heating, and electrical systems and accessibility retrofits. Function improvement grants will top out at $800,000 per property over five years, or $400,000 in any single year.

Overall, the new program is expected to cost HRM $4 million over the next five years.

The motion passed, and municipal staff will start accepting applications in January 2022.

The municipality will soon allow more creativity between the sidewalk and the street.

According to current municipal bylaws, that strip of grass is meant to be grass and grass only. The bylaw goes so far as to require “abutters” keep the grass “closely clipped and to a height not greater than six inches.” A boulevard garden on Tulip Street in Dartmouth in a 2015 Google Streetview image.

The new rules, attached to the staff report to council, are still strict, banning any planters, hardscaping, trees and invasive species, but they allow vegetation up to one metre high as long as it’s one metre from basically anything else.