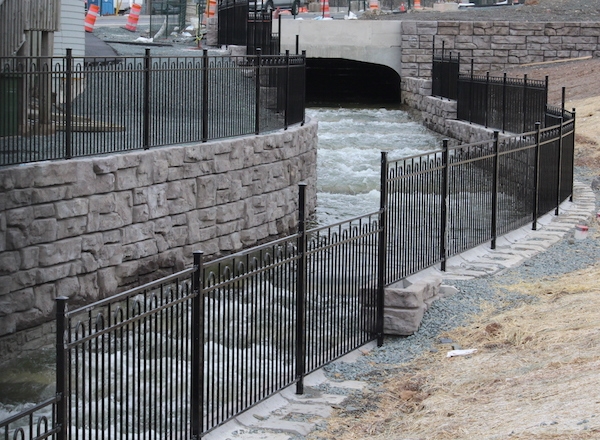 The first phase of the day-lit Sawmill River in Dartmouth.

Councillors voted to restore $2 million in funding for land purchases in downtown Dartmouth, along with money for three jobs related to the city’s climate change plan and two snow-shovelling programs at their budget committee meeting on Friday.

The budget committee has been meeting nearly every day for the last few weeks, rebuilding its 2020-2021 operating budget to account for COVID-19. The committee finished picking items from the budget adjustment list on Friday, adding $3.4 million worth of items back into the budget and kicking another $1.6 million out.

Among the items added back in was $2 million marked “Downtown Dartmouth Renewal” in the capital budget. That money will be used for what Coun. Sam Austin called “Dartmouth’s Cogswell” — purchasing land to realign part of the street grid near Alderney Drive and Canal Street. That work will enable the redevelopment of the industrial Dartmouth Cove area and the second phase of the daylighting of the Sawmill River.

The daylighting project is on Halifax Water’s list submitted for federal and provincial infrastructure funding — at $14.8 million. Austin is worried that if Halifax doesn’t buy the land, Halifax Water won’t be able to secure the funding.

Infrastructure planning manager Peter Duncan told councillors the money will be used to buy land to extend Dundas Street across the river and into Dartmouth Cove, connecting to Canal Street. They’re also looking at extending Dundas past Canal Street to connect to Maitland Street.

Austin met resistance from councillors worried about adding such a big-ticket item back into the budget after municipal staff recommended it be cut.

“I’m thinking that because it wasn’t included in the budget, then it’s the staff recommendation that it not be in the budget,” Coun. Stephen Adams said.

“This is our job as councillors,” Austin replied. “If our job was just to accept the staff budget, we would’ve accepted fire cuts, police cuts and a whole bunch of other things.”

Councillors also voted to restore $137,000 in funding for three positions related to HalifACT, the city’s climate change mitigation plan. That money pays for three six-month positions. That motion passed with only Russell voting no.

And two snow-shovelling programs — one aimed at cleaning up the mess left behind by mechanical snow-clearing equipment downtown for $225,000 and one shovelling out seniors for $600,000 — were added back to the budget.

They also cut $1.6 million from the capital budget for repairs to Halifax Regional Fire and Emergency Station 2 on University Avenue. The fire chief and the head of the union representing firefighters said last week they’d prefer to cut that funding than to reduce staffing. There’s still about $100,000 left in that budget.

In all, councillors added $14.8 million worth of items back into the budget this week, including reducing cuts to fire and policing to $3.5 million each and filling $5.6 million worth of jobs that would’ve been left vacant. They also cut $2.35 million.

Adding it all up, the capital budget is now cut further than before, by $350,000. That’s because a majority of councillors voted to cut their district capital funds by $750,000.

Chief financial officer Jane Fraser will now take council’s additions to the budget and identify funding sources for each item. She told councillors there’s about $15.8 million available to use from the 2019-2020 operating surplus, but she’d prefer it be used for one-time items, like capital.

Fraser told councillors earlier this week that 71% of property taxes were paid, leaving $111 million unpaid. Those taxes are due Monday. Fraser’s office originally budgeted for $188 million in late property taxes — money the city would’ve borrowed from the provincial government at a cost of $31.4 million. Because the city will be borrowing less from the province, the cost of the debt will be less, freeing up operating money for council’s budgeted items.

There are also the budget options floated in a motion from Coun. Waye Mason — reducing the amount of money the city deposits in reserve accounts this year, budgeting less to pay back the provincial debt, and taking on more debt for capital projects.

The final budget, along with Fraser’s report on funding sources for the added items, is scheduled to come before council on June 9.