You are here: Home / City Hall / Desmond Cole: my night with the Halifax PD 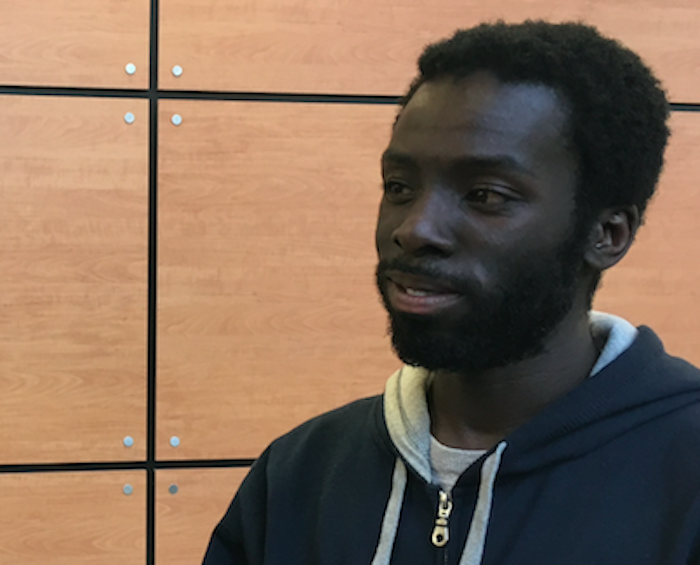 Desmond Cole popped into national consciousness in April 2015, when he published an opinion piece in Toronto Life magazine with the headline “The Skin I’m In: I’ve been interrogated by police more than 50 times — all because I’m black.”

The article detailed how Cole has been followed, stopped, carded, and otherwise harassed by police, despite having done nothing to merit suspicion. As a result of the article, more attention came to be paid to the issue of carding in Toronto and elsewhere in the country. Cole’s article prompted the CBC to file a Freedom of Information request about “street checks” (the local equivalent of carding) in Halifax, which revealed that black people are stopped by police at three times the rate as are white people.

Cole became a columnist for the Toronto Star, a position he gave up in protest after he was told his actions at the Toronto Police Board were inappropriate for a columnist. He now hosts a radio call-in show in Toronto.

Cole is in Halifax this week, and I interviewed him yesterday for this week’s Examineradio podcast; the podcast and the full interview with Cole will be published Friday.

During our talk, Cole detailed an disturbing encounter he had with Halifax police the last time he visited Halifax, a few months ago. He has never before told this story publicly.

Cole was here to give a talk. After the talk, he and his friends went to a downtown bar. As he was leaving the bar, said Cole, “I looked to my left, I was about to get a cab, and I saw a woman down on the ground face-down. I saw a man on top of her, kneeling on top of her, using his body weight to press down on her, pushing her face into the ground. I walked over because this didn’t look right and I wanted to know what the hell was going on.”

The man turned out to be a bouncer, and he was restraining the woman until the police came. Cole went on to say that a lot of other people were on the street watching the encounter, but just he and one other person, a white woman he later learned was named Megan, were actively trying to get the man to stop being so rough with the woman on the ground. “He was really giving it to her, and I thought this is so inappropriate,” said Cole.

Seven cops arrived with a police wagon, said Cole. “One of the cops was being very cowboy, and he came right up in my face and said to give him space, and he didn’t want me to obstruct him.” The woman who had been on the ground was handcuffed and continued to be treated roughly by the police, said Cole, so he and Megan asked the cops to take the handcuffs off. “There’s like seven of you,” said Cole. “Why are you being like this?” A woman police officer then told the woman that if she calmed down, she’d take the handcuffs off.

“Now cowboy cop comes back and gets in my face… and shoved me in my chest and I flew backwards,” continued Cole. “And the woman [Megan] who had been next to me the whole time doing what I had been doing and advocating for the woman who was getting arrested — he looks over at her, and I saw it in his eyes that he thought ‘these two are together,’ in whatever capacity, he thought, ‘these two [Megan and Cole] are together.’ And he looked over at her … and he says ‘now I’m going to arrest you,’ and he takes out his handcuffs and he arrests her right in front of me. He didn’t say why he was arresting her. I didn’t hear him read her her rights, anything, tell her what she was charged with, nothing. Put her in the wagon.”

Cole realized that he was going to be arrested next. He paused in relating the story and looked me in the eye. “So Tim, I ran. And I literally went and I hid.” While he was hiding, he saw a police cruiser coming around looking for him.

“I realized I’m not in my town. I’m not in my province. I don’t know anybody around here. My friends have gone home. I can’t keep this up. There’s nowhere for me to hide. I’m just going to have to come out. So did. I went right back to the spot where these other two women had been arrested.”

The boyfriend of the first arrested woman saw Cole, and thanked him for trying to intervene on her behalf. “Let’s try to get these women out of jail,” said the boyfriend. A group went to the police station but could get no satisfaction. Just then, however, Megan walked up from behind the police station.

Cole said he went back the next morning “and gave them what-for at the police station,” but didn’t file a formal complaint.

Subsequently, Cole told me, a police sergeant said he was aware of the situation and that the “cowboy” cop had written the police report. Cole has no idea what it says.

Here’s the raw audio from my interview with Cole. A longer version will be published Friday: