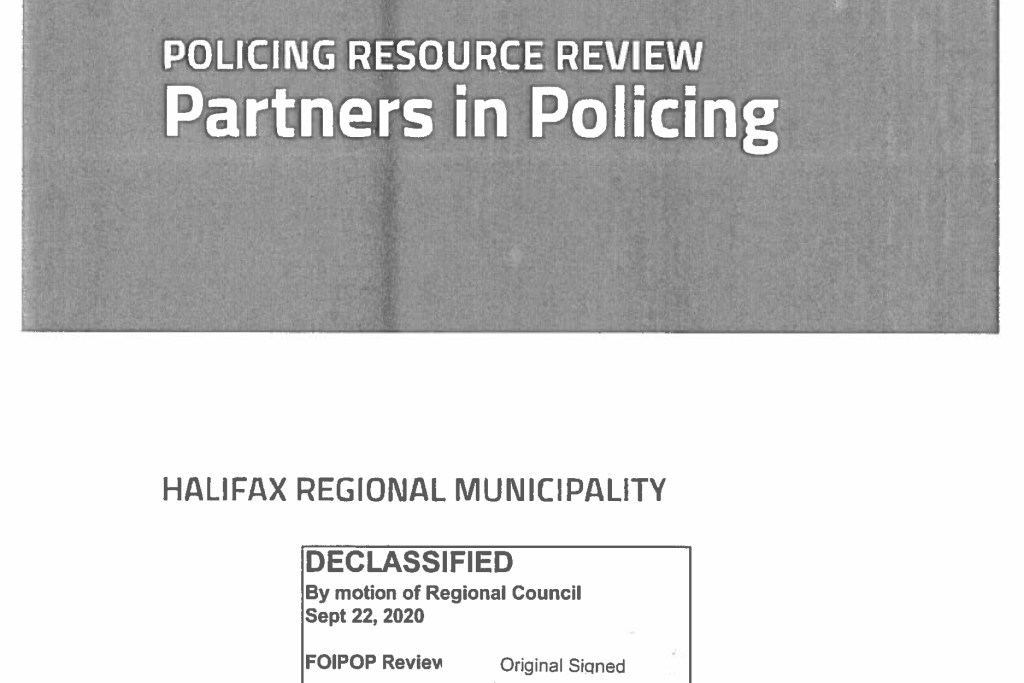 The cover page of the recently released Policing Resource Review.

They had nothing to hide, but they hid it anyway.

Following months of requests from the Halifax Examiner, the municipality has made a consultant’s report into police resources public. And while the report is somewhat heavily-redacted, it contains nothing to justify keeping the entire document under wraps.

The report by B.C. consultants perivale + taylor was completed by August 2019 at a cost of about $200,000, but didn’t make it to council until January 2020. At that time, council approved the staff recommendation to adopt all but three of the 29 recommendations in the report.

Starting that day, the Halifax Examiner asked for the document on numerous occasions. Chief administrative officer Jacques Dubé originally said he’d release it proactively, with a few redactions. But as we reported in September:

That never happened, and in June, the Examiner filed a freedom of information request with Halifax Regional Police, asking for a copy. A month later, police told us the municipality has the document, not them.

In late-July, the municipality’s freedom of information office received our request: “A copy of the Police Service Review by Perivale & Taylor, tabled at Halifax Regional Council on Jan. 14, 2020.”

On Monday, more than two weeks after the 30-day deadline in which the municipality has to respond, the request was denied in a letter from municipal access and privacy officer Nancy Dempsey.

Dempsey cited Section 473(1) of the Municipal Government Act in denying the request:

The responsible officer may refuse to disclose to an applicant information that would disclose the minutes or substance of the deliberations of a meeting of the council, village commission or service commissioners or of the members of the municipal body held in private, as authorized by law.

In late September, the report became public. On the cover page, it says that’s due to a council motion of Sep. 22, likely an in camera motion considered a “public security” matter, moved by Coun. Lindell Smith and seconded by Coun. Tony Mancini.

What’s in the report and what’s new?

The purpose of the report, as per the staff report bringing it to council in January, “was to provide the CAO with a clear evaluation, including suggestions and recommendations to: Create service effectiveness and efficiencies; Address resourcing constraints and opportunities; Identify and provide recommendations to close service gaps; Identify new equipment or technology to enhance service delivery; Outline areas where there is potential for savings or cost avoidance; and Engage all levels of the service in the change process.”

Halifax Regional Police Chief Dan Kinsella speaks to the board of police commissioners during a meeting on Thursday, Jan. 9, 2020. Photo: Zane Woodford

Most of the recommendations were made public in that report to council, but even some of those were kept in camera. As the Examiner reported in January:

Seven of the recommendations are listed as “Nine HRP sworn positions should be considered for civilianization” and recommended for implementation. It’s not clear which positions those refer to and Kinsella wouldn’t elaborate when talking to reporters on Tuesday.

“No, I can’t tell you,” he said. “That’s part of the in camera piece of the report that’s gone to council so I’m not in a position to share those with you.”

Kinsella said he’s not even sure those positions will be civilianized because he’s still reviewing them and they’ll have to work with the union.

Those recommendations are not redacted in the newly-released report. They are:

Regular Examiner readers will be familiar with the ViCLAS (Violent Crime Linkage Analysis System) system from Tim Bousquet’s reporting on the Glen Assoun case. Information that would’ve proven Assoun’s innocence was deleted from that database while former RCMP officer and ViCLAS analyst Dave Moore was on vacation.

There are generally two reasons perivale + taylor recommended civilianization: sworn officers typically don’t have the experience necessary to do the job well, and it’s unnecessary to have a sworn officer in the position, leading to lost time and increased cost for mandatory training.

In the case of ViCLAS, the report’s authors wrote that:

Police powers are not required for the ViCLAS function; the skills are technical and analytical. A qualified civilian analyst would provide greater continuity, fewer absences due to mandatory police training and certifications, and reduced turnover, at a lower cost.

The RCMP have both sworn and non-sworn staff in these positions. A comparator agency civilianized the position some time ago.

Salary costs should be reduced. Mandatory annual police-related training and certification time will be avoided. The process can begin in 2019 and the new job description can be customized to the civilian ViCLAS function.

In the staff report to council, management said they accepted and would implement those staffing changes, but not necessarily any time soon:

HRP has been progressively gaining specialized expertise through civilian roles in functional and leadership capacities. For example, the new Chief Information Security Officer and the new EFAP lead roles have been civilianized. The Forensic Identification Section has hired its first civilian forensic technician. While all the changes in the recommendations #13-19 will not be achievable in the near term, HRP will continue with this trend with the end goal of ensuring appropriately skilled people are in appropriate positions.

In some cases, the full recommendations in the report are partially redacted. Recommendation 20, for instance, reads:

Airport policing should be seamless with the police of jurisdiction, [redacted] in consultation with the RCMP, HRP, the Board, and HRM, [redacted]. 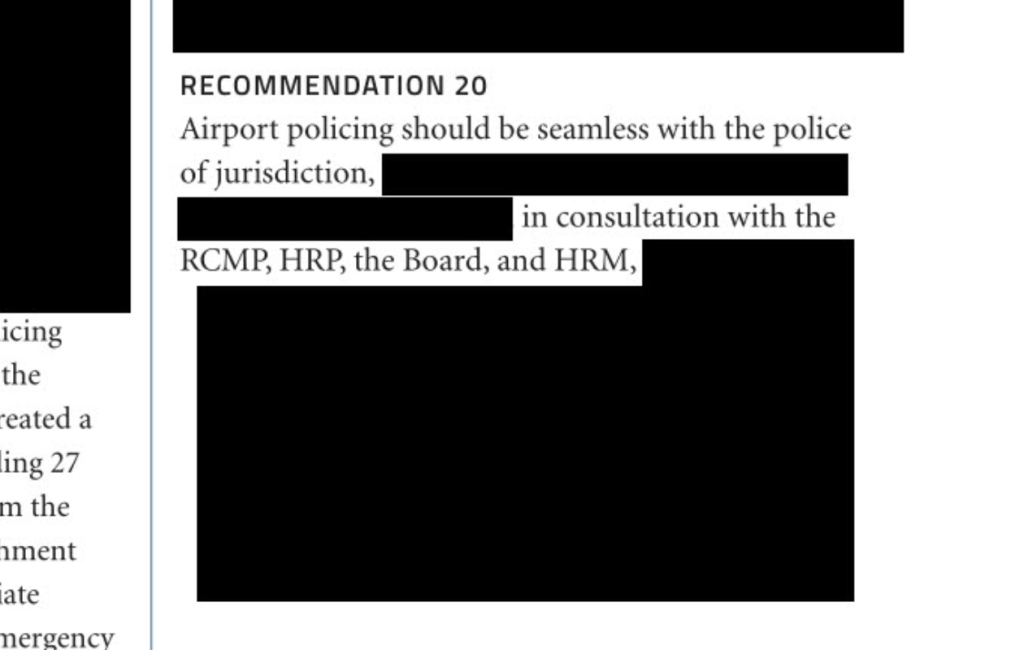 This recommendation into airport policing was partially redacted.

That happens to be one of three recommendations management recommended against. “Not applicable, as it relates to a separate service contract negotiated with Halifax International Airport Authority, which is a private entity,” HRP communications manager Neera Ritcey wrote in the report in response to the recommendation.

While much of the section is redacted, the report makes the case that it’s more sensible from a jurisdictional standpoint to just have the Sackville detachment of the RCMP handle the airport:

Over the past decades, the increase of mass private properties — privately-owned and operated public spaces, have affected the nature of public policing. For example, most airports in Canada are policed by the principal police agency of the jurisdiction. Likewise, other mass private properties such as the Port of Vancouver and the Port of Halifax are policed by the jurisdictional police.

The RCMP used to hold the contract, but HRP bid on a request for proposals in 2015 and began policing the airport in April 2016.

There are entire sections of the report redacted. 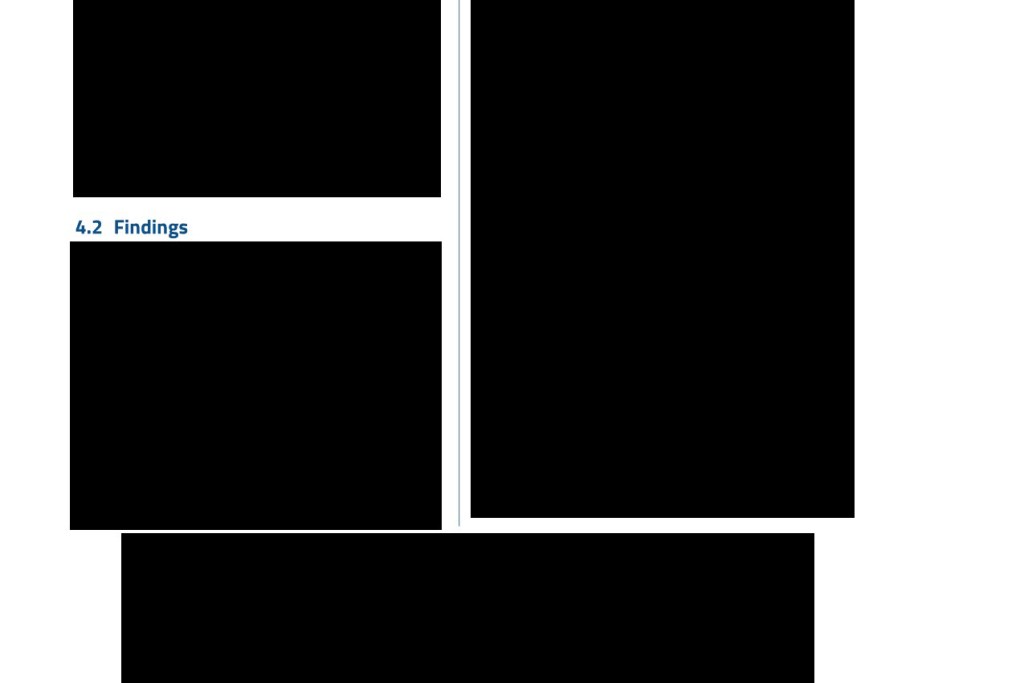 One of the more redacted pages in the report.

Nearly all of the five-page chapter on security is redacted. Information technology security is a known issue for HRP. In 2018, the city’s auditor general revealed that police had yet to act on a 2016 consultant’s report that “considered various IT security matters by looking at the likelihood of something going wrong and the impact if it does.”

HRP eventually hired a civilian chief information security officer to work through those issues. In the response to three recommendations around IT security in the policing services review, police said they’re still working on a plan.

There are also some inconsistencies between the report and the chief’s own changes made last year.

For instance, a section on the force’s professional standards branch reads in part:

It is understood that at this time the function is staffed by the Sergeant only, and the workload for the Sergeant position is reportedly appropriate.

But just a few months after the report was filed with the municipality, while making the case to the board of police commissioners for a budget increase, Kinsella said he needed a new staff sergeant and two detective constable positions in the professional standards branch. As I reported at the time:

Kinsella is also asking for two more detective sergeants in that branch to make sure it can fulfil its mandate, including strict timelines on the length of the investigations.

“We are doing those investigations now,” Kinsella said. “This would give us an opportunity to do them quicker and meet a number of obligations and I think bring better satisfaction to the (complainant).”