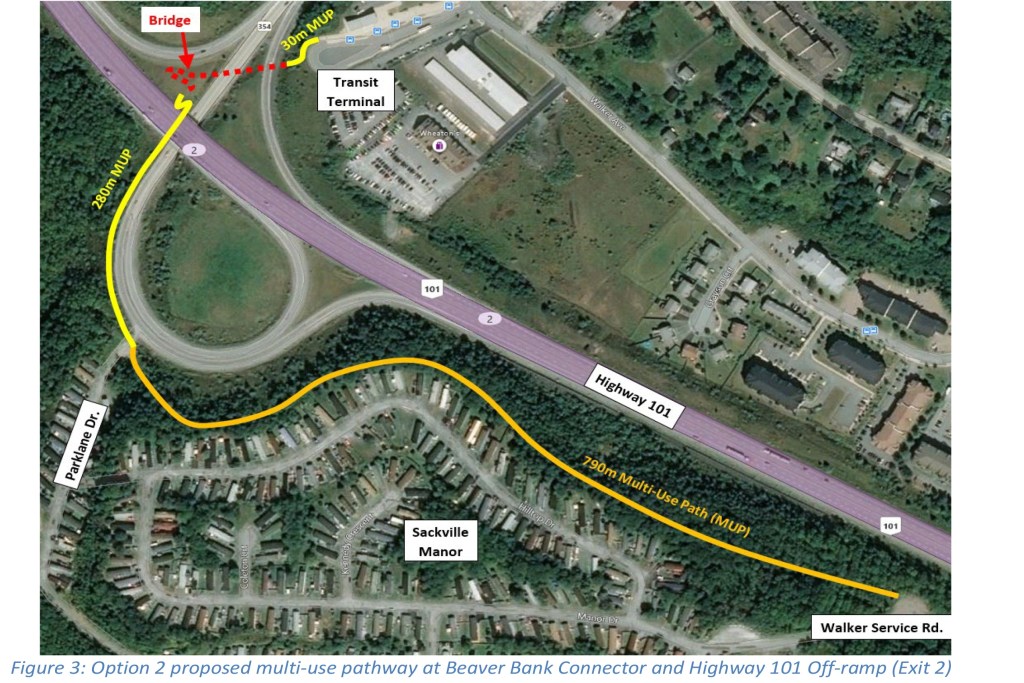 Halifax is hoping to fix a “longstanding problem” in Lower Sackville with a new pedestrian path and a bridge over a highway exit ramp.

Pedestrians coming to and from the Sackville Manor mobile home park have been crossing Exit 2 of Highway 101 for decades. It’s the fastest way for residents to get to the services on the other side of the busy highway — the transit terminal, the grocery store, and other amenities. In the past 10 years, two people attempting the maneuver have been hit and killed by drivers travelling in or out of Lower Sackville.

The route pedestrians take is visible on Google Maps, with a well-worn gravel path. They come out of the mobile home park at Parklane Drive, which is blocked with a gate, only accessible to fire trucks. Pedestrians then walk along the narrow shoulder under the highway, then cross two lanes after the over pass, cross another lane coming down from the highway, and then walk up the hill to the transit terminal.

“Whenever you’re trying to cross a highway off-ramp or on-ramp when it’s unlit, when it’s remote, when cars are accelerating or decelerating, and they’re travelling at near-highway speeds, it’s not a good situation. And yet that’s what we’re faced with, and this is a situation where people have been doing this for decades, and fortunately we have only had two fatalities.”

In 2018, Russell’s predecessor, now-MLA Steve Craig moved for a staff report to “outline what the infrastructure requirements and recommendations would be required to improve pedestrians’ safe passage” around the provincially owned roadways. Staff brought that report back to the committee on Thursday, outlining three options. 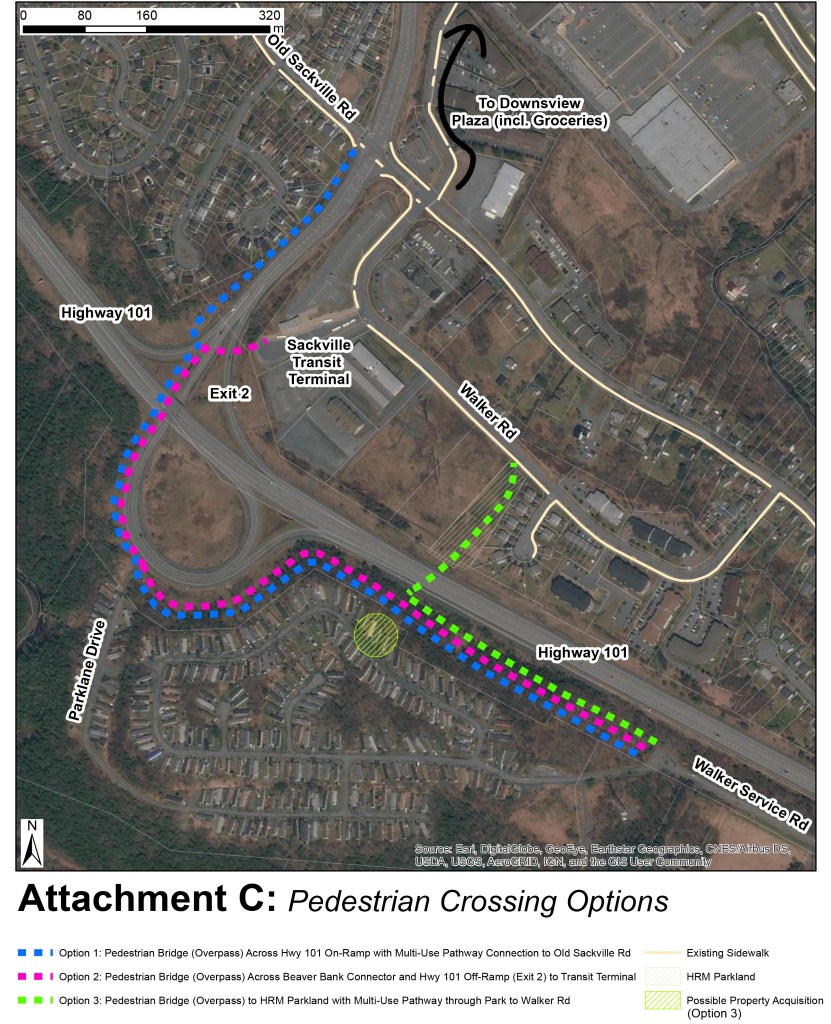 The three design options, with the staff-preferred one in pink, matching the route pedestrians are using now.

Under the third option, the pathway skips over the highway with a pedestrian bridge, meeting up with Walker Road on the other side of the 101. That’s the provincial government’s preferred option because the path never runs alongside their roads.

The other two options see the path carry on under the highway, requiring some kind of barrier between pedestrians and traffic, before splitting off into options for two different bridges. 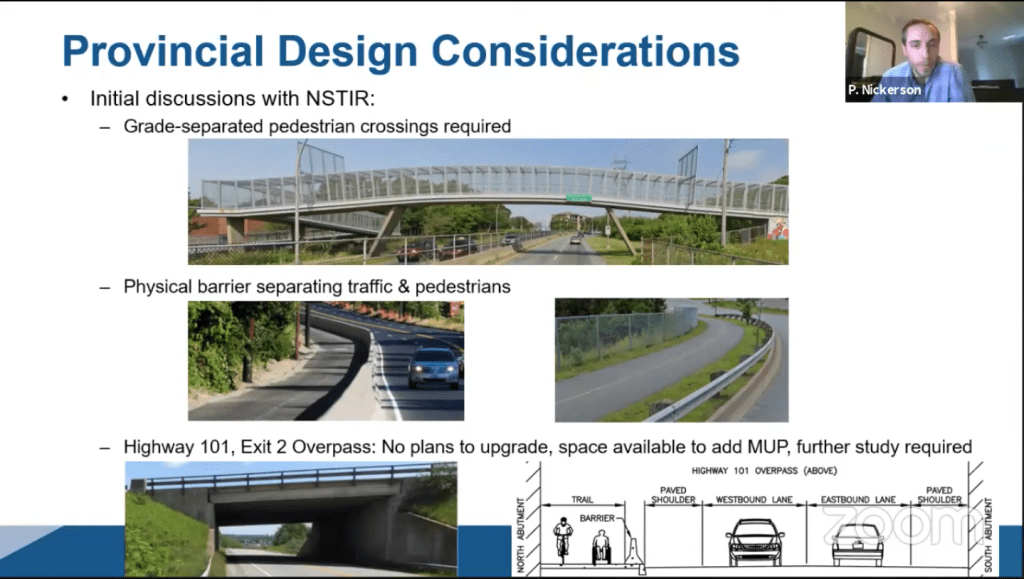 A slide from staff’s presentation tot the committee showing the preliminary design ideas for the new path.

Option 1 sees the bridge bring pedestrians over to the northwest side of the road and leads to the intersection with Old Sackville Road — a dangerous one in its own right.

Option 2 follows nearly the same route pedestrians are taking now — the so-called desire lines — bringing them up to the transit terminal using a bridge over a total of three lanes of traffic. That’s the municipality’s preferred option, and Russell said it’s the community’s as well.

Russell said he recently knocked on doors in the park and 100% of the people he spoke to were in favour of Option 2. He called it an “ideal solution,” and said he worried about the other options because people would just continue to do what they’ve always done.

He was also concerned about one portion of the staff-recommended motion: “Direct staff to initiate conversation with [Nova Scotia Transportation and Infrastructure Renewal] to request that they install measures (e.g. jersey barriers, fencing) to serve as a deterrent to pedestrian crossing between Sackville Manor and Old Sackville Road as an interim measure.” Russell amended the motion to change “install measures” to “consider measures.”

“If the province installs fencing to say, ‘No, don’t use the shoulder of the road,’ it would push them further into traffic,” Russell said.

“They would still use it. I am absolutely convinced of that, and it would make the situation more dangerous.”

The other half of the motion directs regional council to direct staff “to conduct functional planning in 2022/23,” pending inclusion of the cost in the budget. That motion as a whole passed unanimously.

“This is their community too,” Mancini said. “and I don’t buy the fact that they don’t do pedestrians. We’ve had two deaths on it.”