Halifax Regional Police Chief Dan Kinsella says his officers won’t remove people tenting in municipal parks if they have no place to go.

“I think we’ve all come to the place where if we don’t have somewhere to send anyone we are not asking them to leave currently, so that will obviously have to be factored in, so there will be more dialogue, there’ll be more discussion.” 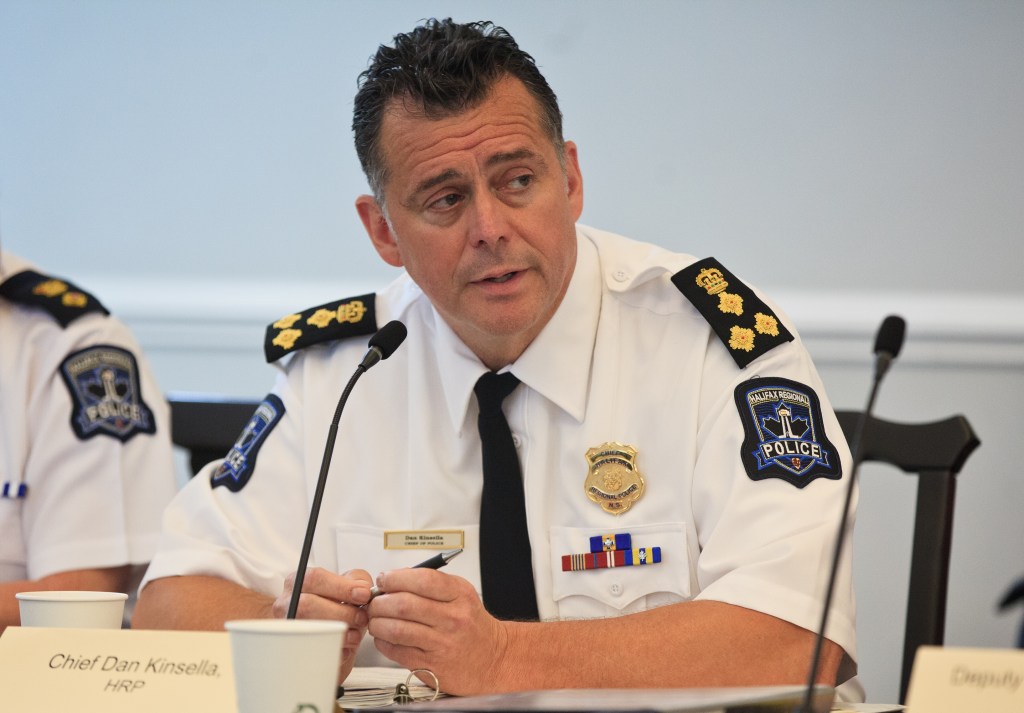 Kinsella was at council to answer questions about the plan from municipal staff to allow people to shelter in tents in eight sites spread across four municipal parks. While Max Chauvin, parks and recreation special projects manager, said compliance officers or street navigators will try to exhaust all options to get people to move to the designated sites, the plan ultimately relies on Halifax Regional Police for enforcement, as the Halifax Examiner reported on Monday.

During the meeting on Tuesday, Chauvin reiterated what he wrote in the staff report, that the number of sites proposed, space for about 32 tents, should be sufficient to meet demand.

“This hopefully will provide enough space for the people sleeping right now immediately in parks. There are other folks that are homeless that are sleeping in other locations, but this will hopefully provide space with with folks who are sleeping in parks with some of the other housing that’s coming online,” Chauvin said.

“But if there is a need for additional locations, it is our intention to approach the provincial and federal governments.”

As of Tuesday, there were 622 names on the Affordable Housing Association of Nova Scotia’s by-name list of people looking for housing. The point-in-time count conducted in April identified more than 90 people living outside in HRM, and it’s unknown how many were in parks.

Chauvin said the timeline to transition people from unsanctioned to sanctioned park sites is hard to nail down.

“It is difficult to put specific timelines on some of this work because it is fluid working with people,” he said.

There will be signs posted in the park sites to indicate the number of tents allowed, and maps distributed to service providers and navigators to help inform people about the sanctioned sites, Chauvin said.

The first point of contact for people currently sleeping in unsanctioned municipal park spaces will either be the street navigators, one of whom works for HRM and two for the business districts, or HRM compliance officers, including two new “park patrol” officers to be hired in the coming months.

They’ll meet with people in the parks and try to determine their needs, Chauvin said, they’ll talk about compliance, and then negotiate with the person to get them to move to a sanctioned site.

“Ultimately, we do envision unfortunately that there might be situations where there’s no option left and someone refuses to move,” Chauvin said.

That’s when the cops come in.

“If there’s no other choice, we would have to turn to HRP as the final resort if there’s nothing else,” Chauvin said.

The process would be mostly civilian-led, Chauvin said, and HRP would never be called in unless first discussed with Maggie MacDonald, the executive director of parks and recreation.

“There may come a time when somebody needs to be removed,” Kinsella said. “But I think through the education piece, the engagement piece, the great work that Maggie and team have done, I’m hoping that we can find an alternative that can be negotiated, keeping in mind everyone’s needs at the table.”

Though they raised concerns about the enforcement part of the plan during the last debate on the topic — and amended it to ask for “a timeline and a plan for supporting the transition, education, and implementation that is led and delivered by civilian HRM staff” — councillors were generally in favour of the new version. It passed unanimously.

Deputy Mayor Pam Lovelace pointed out that there are people sleeping in parks outside the urban core of HRM, yet the RCMP isn’t part of the plan.

“Why was there no input from the RCMP? Is there an assumption that RCMP to acts in the same way that HRP have told us here today that they’re going to act?” Lovelace asked.

MacDonald confirmed that there was no discussion with the RCMP, but said she’d talk to them.