You are here: Home / City Hall / Councillor wants to identify ‘preferential or prejudicial language related to race’ in Halifax policies. Here’s what that really means 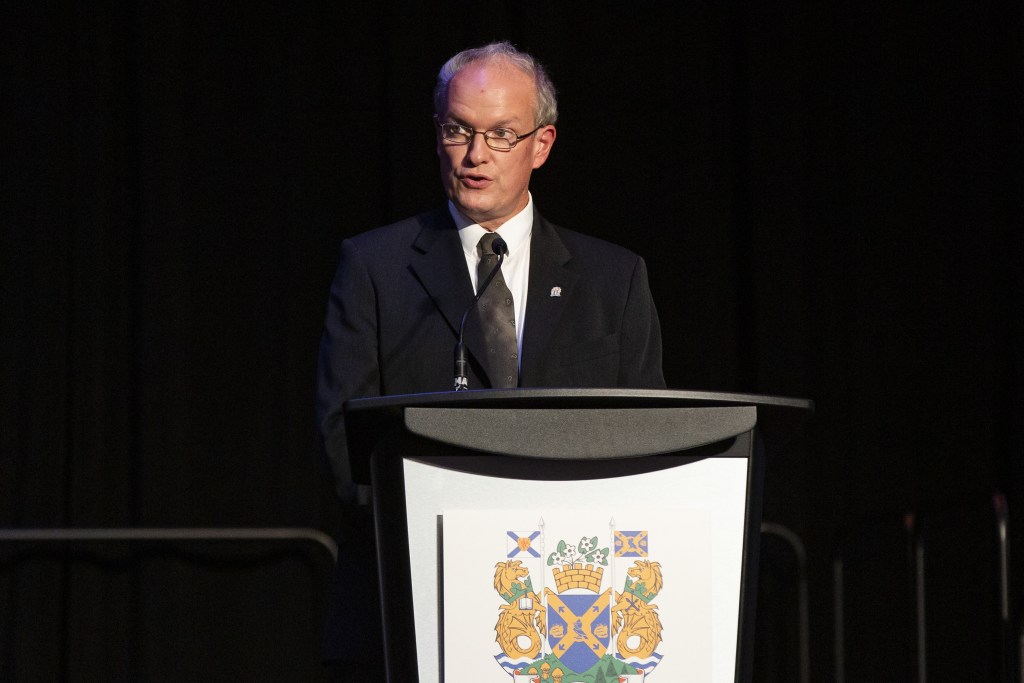 Coun. Paul Russell reads the oath of office during the swearing-in ceremony for council in October. — Photo: Zane Woodford

A Halifax regional councillor wants to root out racial language in the city’s policies, but at least one of his colleagues worries that kind of move would leave marginalized people behind.

At Tuesday’s meeting, Coun. Paul Russell gave notice of motion for this coming Tuesday’s meeting, announcing that he intends “to request a staff report that identifies any forms of preferential or prejudicial language related to race in any HRM bylaws or administrative orders.”

In an interview, the councillor for Lower Sackville said his intent is to determine whether systemic racism exists in Halifax Regional Municipality, and send a message that the municipality won’t support racism.

“Rather than claim that we have [systemic racism] or don’t have it, let’s have a look at all the documentation,” Russell said.

“I want to have a look at any language that we have in the bylaws or the administrative orders that talk about any preferential or prejudicial anything that talks about race.”

Asked for an example of preferential language related to race, Russell first said, “At this point, I don’t know.

“It’s a fishing expedition in some areas. I just want to make sure that our documents are clean,” he said.

Asked whether it has anything to do with the municipality’s new social procurement policy — which, along with a living wage policy, includes a section on supplier diversity, meaning “opportunities for diverse suppliers including suppliers owned, operated by, or employing African Nova Scotians, Indigenous peoples, people with disabilities and/or other traditionally underrepresented groups” — Russell said that’s part of it.

“That does have a little bit to do with it, but I want to make sure that everything, that there’s nothing in there. The procurement policy is part of it, but I want to have a far more broad look at things than that,” he said.

Russell said he’s “not looking to take anything out that makes sure that everybody is included.”

But asked more about the word “preferential,” Russell said he doesn’t think the municipality’s policies should include any preference for anyone.

“Why should something, why should a contract be awarded based on anything other than the ability to fulfill the contract?” he asked.

“I am looking broadly across all administrative orders and bylaws. I don’t want to focus on one. I want to look at everything. I want to see if there is anything in any of the policies that causes anything like that.”

Russell voted against the social procurement policy, mainly because he’s opposed to requiring contractors to pay employees a living wage.

“When I hear that, what it seems to be to me is trying to remove anything that would give preference on anyone who is of colour, anyone of any different cultural background, and putting everyone on a ‘level’ playing field,” Smith said in an interview.

Smith explained the importance of that kind of language in the municipality’s policies:

It’s recognizing that there’s been injustices and there’s been folks who’ve been held back because of systemic racism. And that’s why these type of policies or bylaws or whatever it might be are put in place, is to make sure that we never get to a place where folks who are marginalized get left behind. If we were, as a city, to remove any types of policies or bylaws in that sense, I feel we would still be dealing with the issues that we’ve seen in the past, where folks either get passed up on jobs or they don’t get the same training as somebody else.

It appears to Smith that Russell’s intent “is removing that work that has been done, and is recognized all over the world, that needs to be done, to make sure that all people have the right access to growing and prospering.”

Smith said he’s ready to have a larger discussion at council and try to better understand Russell’s rationale for the motion.

Asked what he thinks of the concept of equity versus equality, Russell offered an example. During the recent election campaign, he was asked in a survey whether he’s a feminist — yes or no.

Russell provided another example, saying he doesn’t care if a firefighter is male or female as long as they can carry him down a ladder unconscious.

After giving notice of the first motion, Russell also gave notice that he intends to move for a staff report on adding a “buy local” policy to the municipality’s procurement administrative order.

Such a policy would presumably include preferential language related to location, and when Smith tried to bring it forward years ago, he was told it’s illegal.

Council is scheduled to meet at 10am on Tuesday.