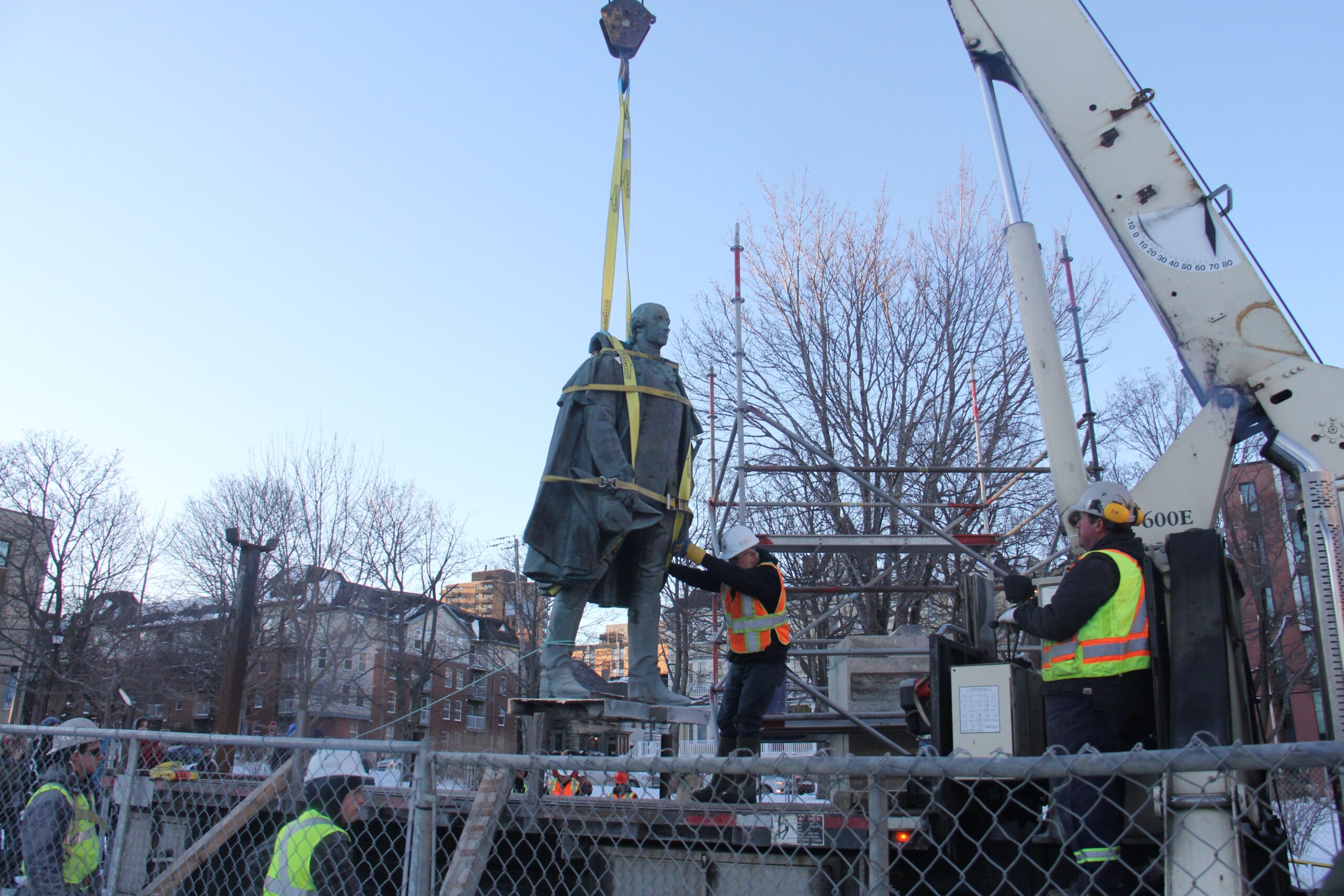 The Cornwallis statue being lowered onto a truck on Jan. 31, 2018. — Zane Woodford

A statue of Halifax’s so-called founder will never again stand in a position of public commemoration after regional council voted to accept that and many more recommendations from the task force charged with deciding its fate.

The Task Force on the Commemoration of Edward Cornwallis and the Recognition and Commemoration of Indigenous History tabled its final report to Halifax chief administrative officer Jacques Dubé in late May, and it became public as part of the agenda for council’s Tuesday meeting on Friday.

The report makes 20 recommendations to the city, all of which municipal staff recommended council either accepted or agreed with in principle.

The first: “That the statue of Edward Cornwallis not be returned, under any circumstances, to a position of public commemoration.”

The statue should be kept in storage until the municipality creates a museum to commemorate the city’s history, at which time it should be transferred to the museum’s collection, the task force recommended. Cornwallis Park should be renamed Peace and Friendship Park, in honour of the treaties signed with the Mi’kmaq in the 1700s. And the task force recommended that Cornwallis Street be renamed New Horizons Street to reflect the New Horizons Church, formerly known as Cornwallis Street Baptist Church.

Coun. Lindell Smith moved on Tuesday to reject that recommendation and instead propose a consultation process to let the community pick the new name for the street.

That amendment passed, and council voted 14-3 in favour of an amended motion to “approve the proposed HRM responses to the recommendations of the Task Force report.” Councillors David Hendsbee, Stephen Adams, and Matt Whitman voted against that recommendation.

The vote on the first and third parts of the staff recommendation, to accept the report and to direct Dubé to provide annual updates to council, passed with only Whitman voting no.

Aside from the recommendations, the report is a condensed yet comprehensive history of relations between the Mi’kmaq and the British, Cornwallis’ time in what would come to be known as Halifax, and the saga that led to the removal of the statue in January 2018 and the creation of the task force.

Cornwallis came to Nova Scotia as governor in 1749 to settle the area the Mi’kmaq called K’jipuktuk and issued a bounty on Mi’kmaq scalps in response to a raid on a sawmill.

Fast forward to the 1920s, when the Canadian National Railway wanted to attract tourists to its new train station. The railway commissioned a statue in the park across the street, and in 1931, the statue was unveiled to great colonial fanfare.

And as the task force report notes, the statue isn’t even a likeness of Cornwallis.

“The statue itself bore no physical resemblance to Cornwallis, because the sculptor worked with a portrait that proved not to be of the right subject,” the report says. 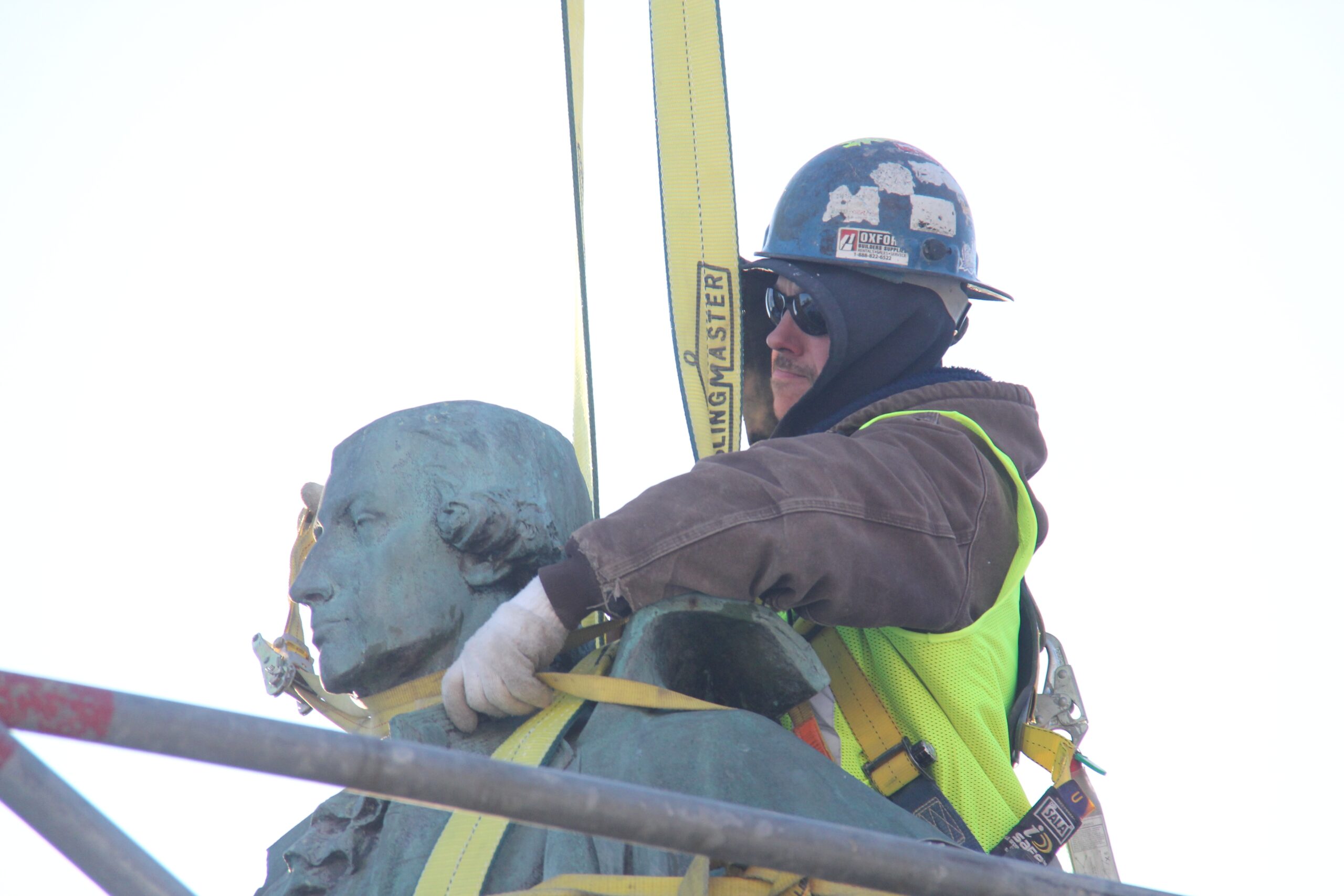 A worker tightens straps around the neck of the Cornwallis statue on Jan. 31, 2018. — Zane Woodford

In response, Hendsbee said Halifax should decapitate the statue and commission a new, accurate bust of Cornwallis to replace the head. The councillor later claimed to be a seventh generation descendent of a Mi’kmaq chief.

Blackburn was on the Rick Howe Show on Monday, and the Cornwallis debate dominated the discussion. She said a few callers asked when their British culture would be recognized. During Tuesday’s meeting, she replied:

Every day at noon when you hear that gun, your British culture is being recognized.

With every heritage building that you walk past that was designed by a Victorian architect, your British culture is being recognized.

Every time you hear fiddle music wafting out of the Lower Deck on a Saturday afternoon, your British culture is being recognized.

If you’ve enjoyed a stroll in the Public Gardens, your British culture is being recognized.

And every time you look up Duke Street and see Citadel Hill hovering on the horizon, your British culture is being recognized.

So don’t tell me that British history is not being recognized in this city. You are immersed in it with every breath you take. Thank you.

Smith said he wished he could just read Blackburn’s statement again, and said he received some “terrible” emails.

“There’s some unspoken history of Citadel Hill,” Smith said. “My ancestors, my family, Jamaican Maroons, were very important to the building of Citadel Hill, and you don’t see that recognized in much of our history. When we talk about commemorating history, we need to look at all the history.”

Mayor Mike Savage invoked John Lewis, the civil rights leader and congressman who died on Saturday, the same day Savage read the report. Lewis is quoted as saying he was “touched by the spirit of history.”

“That spirit of history isn’t cast in bronze. It’s not fixed in place,” Savage said.

“Our history is a dynamic and moving recollection. And it depends on who’s telling the story, but I do believe that history shows us what it means to be human. And when I hear people say that we’re rewriting history by taking the statue down … and we heard it a lot more a few years ago than we’re hearing it now, people are coming to realize now that what we’re actually doing is telling our history, honouring our history, and recognizing that the history that we all learned in school wasn’t the whole story.”

The task force also made several recommendations around how the city can better commemorate that whole story, Mi’kmaq history. Those include more use of the Mi’kmaw language on signage and turning Anglicized names back to their original Mi’kmaw, like Chebucto Road to K’jipuktuk Road.

They also include reviving a 2008 report on a Point Pleasant Park Mi’kmaq Heritage Area Interpretive Plan, and the inclusion, with proper consultation, of Mi’kmaw art in the Cogswell redevelopment project.

And the task force recommends that its report be made available in schools and libraries across the municipality.

You can read the full report from the task force here.