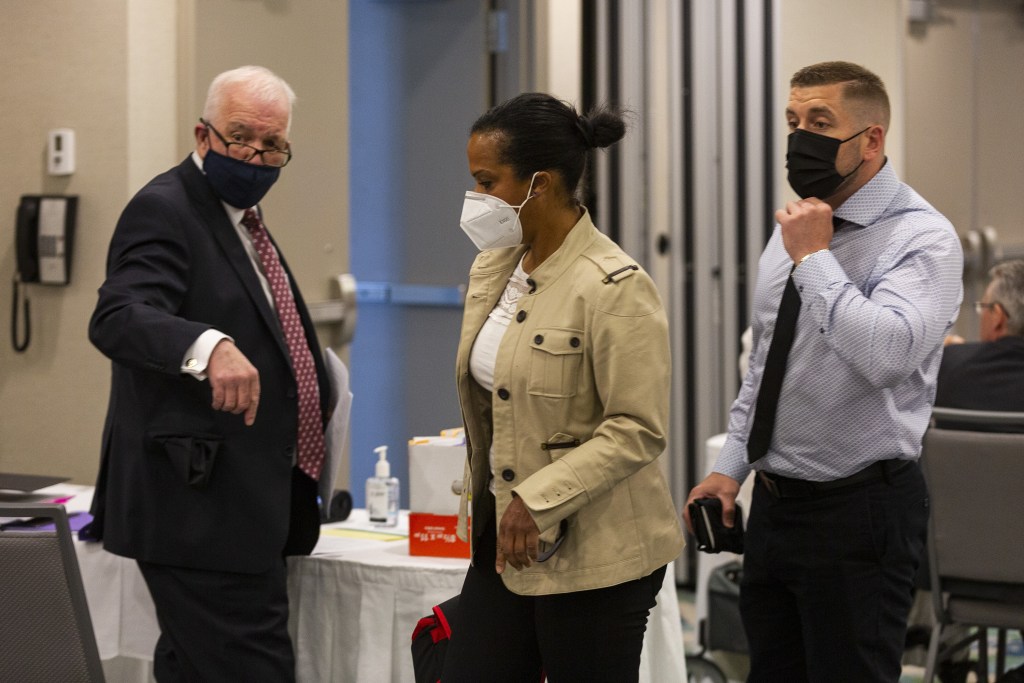 Const. Justin Murphy said he didn’t know Corey Rogers had chugged half a pint of hard liquor before his arrest, but it would’ve been helpful to have that information.

Murphy is one of three officers, along with constables Ryan Morris and Donna Lee Paris, who arrested Rogers and placed him in a cell at Halifax Regional Police headquarters on Gottingen Street the night he died in June 2016. Those three are facing a Police Review Board hearing in Dartmouth this week and next, and Murphy continued his testimony on Wednesday.

On Tuesday, Murphy testified under direct examination from his lawyer, Brian Bailey, and cross-examination from the lawyer for Halifax Regional Municipality, Ted Murphy, that he didn’t think Rogers needed medical attention after the three officers dragged him into his cell.

Jason Cooke, lawyer for Jeannette Rogers, Rogers’ mother, cross-examined Murphy on Wednesday, asking the officer for more detail about the night he and his colleagues arrested Rogers outside the IWK hospital in Halifax.

Cooke asked Murphy about his knowledge of Rogers’ level of intoxication, citing the call to police stating Rogers was “extremely intoxicated,” and Murphy’s previous dealings with Rogers.

Murphy testified he knew Rogers had an alcohol problem, and recognized him from his time “on the wagon,” working the police van in downtown Halifax.

In one of the videos shown to the board this week, Morris is heard saying he was “impressed” how quickly he saw Rogers chug a half-pint of alcohol outside the hospital, before Murphy and Paris arrived on scene.

Murphy testified he didn’t know about the half-pint until Morris made that comment, after dragging Rogers into the cell, but he still wasn’t concerned about the amount because Rogers was an alcoholic.

Cooke asked whether it would have been helpful to know how much alcohol Rogers had consumed.

“It would be helpful, yes,” Murphy said.

Quoting from the medical examiner’s report into Rogers’ death, Cooke noted his blood alcohol concentration was 0.367 grams per 100 ml — more than four times the 0.08 driving limit. He asked Murphy whether that’s consistent with a extreme intoxication.

“In my experience, no,” Murphy said.

He said alcohol affects everyone differently based on a number of factors including what they’ve eaten, their sex, and their weight.

Murphy testified that he believed Rogers wasn’t too drunk too walk, that he was just making it difficult for the officers to bring him into the cell. He said he wouldn’t have dragged Rogers into the cell if he didn’t think he could walk on his own.

Cooke also asked Murphy about whether it’s possible Rogers had any head injuries. Murphy previously testified he knew Rogers had been banging his head against the Plexiglass barrier in the back of Morris’ police vehicle because Morris called that in over the radio, and Murphy saw it himself. He even used the term “smash” his head off the barrier.

But Murphy said he didn’t believe Rogers even had potential head injuries because he didn’t observe any blood or abrasions on his head.

Asked about the spit hood that would lead to Rogers death, Murphy reiterated that prisoners typically take the hoods off quickly once their handcuffs are removed. After placing Rogers in the cell, Murphy said it was the booking officers’ responsibility to watch Rogers on camera and check on him at least every 15 minutes. But that didn’t happen, did it? Cooke asked.

“Unfortunately, no, that wasn’t the case,” Murphy said.

With Murphy’s testimony completed on Wednesday, one of the other officers, Paris, is expected to take the stand on Thursday morning.