Last week, just in time for Crosswalk Safety Awareness Day, the city of Halifax revived its Heads Up Halifax campaign, but with a twist on past years. This year, instead of paying someone to come up with more ads like this:

…the city announced it was going to ask citizens for their ideas on how to make crosswalks safer. 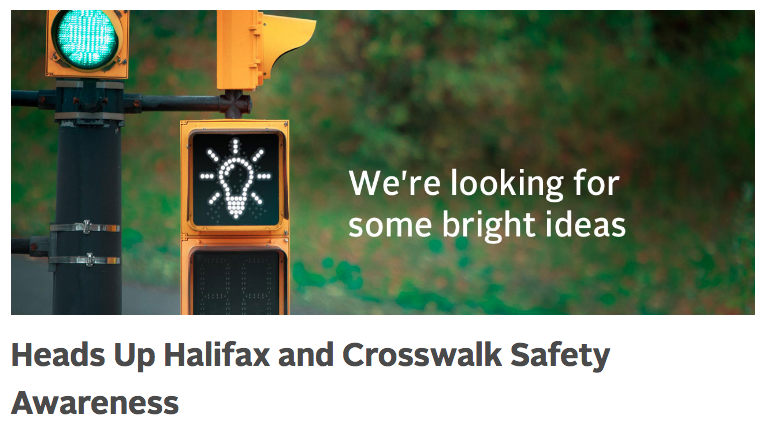 Previous campaigns had been criticized by many, including me, for their focus on “shared responsibility,” despite evidence showing that the vast majority of reported collisions in Halifax are actually preceded by driver errors, not pedestrian errors.

Shared responsibility was the logic behind then-minister of transportation Geoff MacLellan’s effort to “level the playing field between drivers and pedestrians” by raising fines for pedestrian infractions to match those for drivers in 2016. And shared responsibility, unfortunately, has been the mantra of Heads Up Halifax, and at the heart of its failure as a campaign. As I wrote back in 2016:

Driving is a huge responsibility, much, much larger than walking around, and our safety campaigns should be hammering that message, not subverting it.

After this history, I was intrigued and hopeful when I heard HRM was planning to solicit ideas from the general public on how to make crosswalks safer this year. Finally, we’d have a concrete way to hear from everyone about the bump-outs they walked safely past in Montreal, and the way crosswalks are marked and lit in Victoria. Or about the myriad other changes that might make them feel more comfortable getting across the street in Halifax.

And then I read the details. Instead of asking all citizens for their ideas on what kind of systemic and infrastructural changes we might need to get safer crosswalks, the city is actually asking community groups what they might be able to achieve on their own, with between $1,000 and $5,000 in municipal money to spend.

Instead of kickstarting a sort of city-wide brainstorming session, the city is essentially creating a grant competition to existing not-for-profit groups. The total purse is $50,000, which will fund 25 different projects (four $5,000 projects, six $2500 projects, and 15 $1000 projects.)

Now please don’t for a minute think I’m saying nothing good will come of this $50,000 in community grants. On the contrary, I actually look forward to seeing what some advocates in this city will pitch and what we might see implemented as a result. Maybe we’ll see more crosswalk flags pop up (though not necessarily where they are being requested, because city councillors saw fit to outlaw further installations at signalized intersections.)

But just because some good might come of it doesn’t mean it’s right or good that the city has decided to outsource crosswalk safety to community groups. HRM is basically throwing money at a difficult problem here, and doing so in an arbitrarily restrictive way.  The budget envelopes for these projects are set, and well before anyone has had a chance to think about what the best possible projects might be for the task at hand. The budgets are tiny, much too small to have any sort of region-wide impact. And the project proponents must be existing, legally incorporated not-for-profit groups capable of taking on implementation of what they propose.

But here’s the worst bit: the city is holding fast to its commitment to shared responsibility. Here’s the breakdown of how a panel of staff, elected reps and community leaders will assess proposals:

A panel will judge each eligible submission on the basis of the following weighted criteria:

I can very much get behind feasibility (can you actually do this thing?) and impact (will this thing actually work the way you want it to?). But then the city loses me. Why on earth would HRM care about “originality and creativity” (is this thing new and cool?) in an idea meant to help keep people safe? And why on earth would they care about whether this idea reinforces the concept that drivers and pedestrians are equally responsible for collisions, despite all evidence to the contrary? Do they expect every $1,000 pitch to equally target pedestrians and drivers? Has anyone thought about the practical implications of what’s being asked here or… oh right, we are just throwing money at a problem. I nearly forgot. And that’s what Heads Up Halifax has been about from day one.

But let’s not leave on such a sour note. Because the conversation about what kind of systemic and infrastructural changes we need to get safer crosswalks is an important one, I thought we might kickstart it here. I asked three “community leaders vested in crosswalk safety” to weigh in with their top two ideas… the kind that can’t be implemented by a community group with $5,000.

Collins is the driving force behind the Crosswalk Safety Society of Nova Scotia, the source of many of the bright orange flags that grace some crosswalks around the region. He’s a tireless campaigner, and a regular at city council meetings. His top two ideas (that can’t be implemented by a citizen’s group with $5,000) are:

1. Speed humps, or at least rumble strips, before every marked crosswalk, including all signalized intersections and roundabouts, but not all-way stops.
2. A dedicated Crosswalk Enforcement Unit, with regular public reporting of number of tickets issued.

Collins’ concept of preceding marked crosswalks with speed humps reminded me of other close concepts from the NACTO (National Association of City Transportation Officials) toolbox: speed tables, raised crosswalks, and even raised intersections, which keep pedestrians at sidewalk height (no need for curb cuts), and cause drivers to slow down to cross. 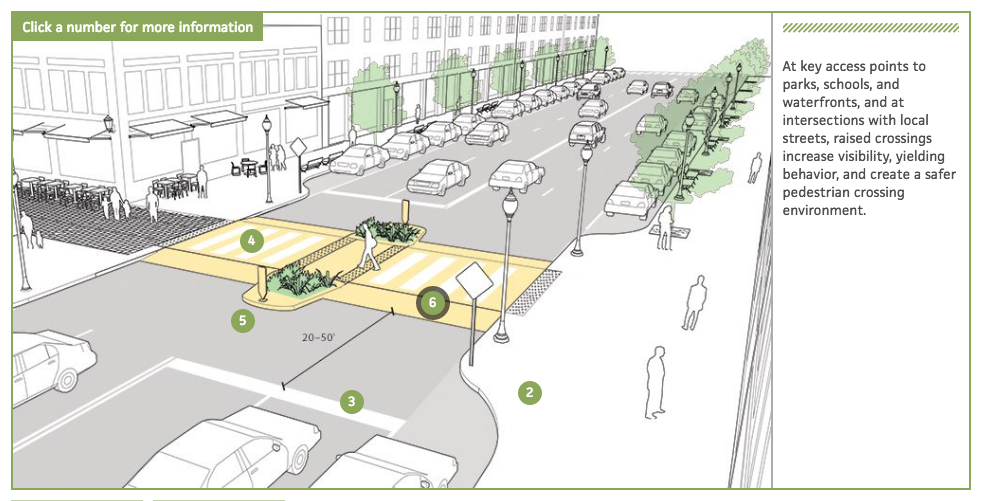 Collins sees some advantages to raised crosswalks, namely that pedestrians have a higher profile in the street, and that they would improve accessibility for chair and scooter users. “On the other hand,” says Collins, “it strikes me as more effective to have a driver encounter a speed hump of some sort in advance of the crosswalk.”

Collins often documents street safety devices he encounters on his travels. Here is a rumble strip placed in front of a crosswalk in Orvieto, Italy: 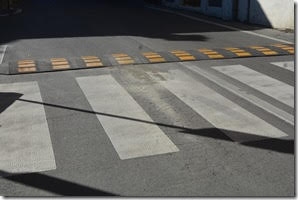 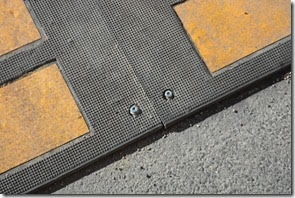 Williams is the creator and administrator of the HRM Safe Streets for Everyone Facebook group, and a contributor over at the Nova Scotia Advocate. Williams is relatively new to pedestrian advocacy, having arrived in Halifax from the UK about two years ago and being “horrified” at the state of safety for pedestrians. “When I saw the flags I thought, thank god someone realizes that this place is so dangerous, and at least thought to provide flags.”

“I would say do the things that don’t cost any money first,” says Williams. His main low-cost idea is to protect pedestrians from turning traffic at signalized intersections. First, by removing right turns on red, a fairly common request among safety advocates. And then, by limited left turning traffic on greens as well, leaving pedestrians with protected crosswalks during at least one phase of a signal. This would mean adding an extra signal phase, one to allow turning traffic, unless it was reasonable to simply eliminate turns altogether at a given crossing.

“It’s not quite a scramble,” explains Williams, “but it’s restricting traffic for the time that you are able to cross.” Williams is a proponent of LPIs (leading pedestrian intervals), the few seconds of head start that are being programmed into some intersections in Halifax on a trial basis. But he is concerned LPIs don’t go far enough, and fully protecting pedestrians from turning vehicles is the way to go.

“My number two would be just to ditch these overhead flashing lights altogether,” says Williams, referring to the pedestrian activated lights that hang over some crosswalks. “I think they are virtually useless especially for the money paid for them.”

“I think that people have said in Nova Scotia for a very long time, if you introduce red lights that are lower down at crosswalks then the signal will be more obvious and clearer to drivers, and then there’ll be less confusion and far less errors, I think. So that one is a lot more simple.” 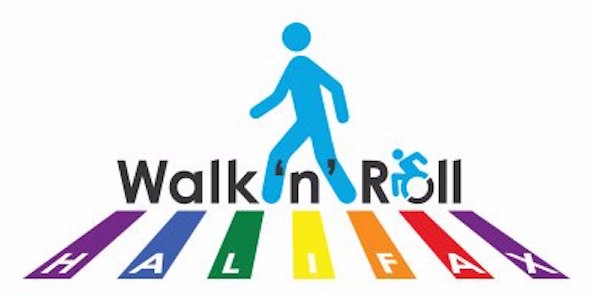 Dodson is a local pedestrian advocate, board member of Walk and Roll Halifax, and walkability representative on city council’s Active Transportation Advisory Committee.

Dodson wants to see the city embrace “short term test projects to build support for permanent changes.” For example, says Dobson,”using paint and bollards to create pedestrian islands or narrow a dangerous road for a short period to see if it makes a difference or builds a constituency for change.”

She’s also got a slightly more radical short term project idea: get rid of on-street parking (except for accessible spots) in downtown Dartmouth and Halifax for two weeks, just to see if the world ends. “Removing on-street parking in the centre core would encourage folks to park on the periphery and use mass transit or active transit within the core,” writes Dodson. “With fewer cars circling around for parking, the roads might again become public spaces to be used by pedestrians and cyclists.”

As radical as the idea of even temporarily removing on-street parking from the core sounds, it might not actually be as negatively disruptive as many might assume, especially if the project included things like significant bumps in transit service. And the experience, hopes Dodson, “might encourage a broader discussion about how we want to use our roads going forward.”