You don’t have to be Negrodamus to have predicted that the Halifax City Council would approve the police budget increase of about a million dollars, but even for the cynical the budget committee meeting on Wednesday demonstrated some surprising depths of unaccountability. 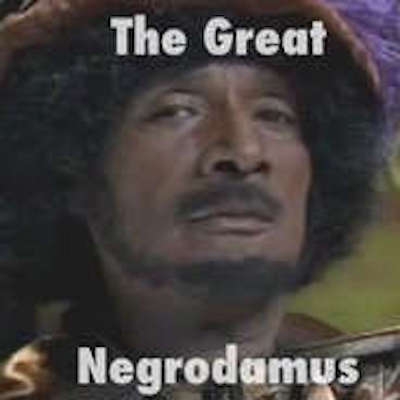 Calls to freeze the police budget in response to the Halifax Regional Police’s ongoing racial profiling and acts of brutality were never going to be acted on by council. Still, the lack of interest showed by council members in even pretending to address the serious violations of rights by the police — demonstrated in the Wortley report and in the Macdonald/Taylor legal opinion — made it clear that the problems with the police are embedded in systemic racism beyond the force. All levels of government are complicit in this neglect and there is a shameful abdication of responsibility by all our public officials.

At the Board of Police Commissioners meeting on January 20, when I presented on the unmet demands of the African Nova Scotian community around racial profiling, the acts of police violence since the police apology, and the absurdity of increasing the police budget while they continue to not respond to community concerns, councillor Tony Mancini responded by asking me if I had anything good to say about the police.

When I pointed out the irrelevancy of that line of questioning, Mancini attempted to derail the discussion of racial profiling by asking police chief Dan Kinsella if he wanted to list the accomplishments of the police. I identified these comments as efforts to invalidate the concerns of the Black community, at which point commission chair Natalie Borden finally intervened, recording that I declined to answer the question.

It was therefore not surprising that at Tuesday’s budget meeting, Mancini continued to publicly and blatantly make clear his unwavering support for the police.

The police commission is the body that is supposed to hold the police accountable. Members of the board who openly praise police “diversity” amid community outrage about illegal profiling demonstrate the lack of interest in doing their jobs. If Mancini wants to cheerlead for the police, asking them softball questions while praising their operations, he should resign his position on the commission and make room for someone who is actually interested in demonstrating some commitment to oversight.

Police Chief Dan Kinsella opened his presentation by offering statistics from 2017-2018 that show a rise in crime. This is confusing, as the police submitted 2019 statistics to the commission that show a drop in crime across the board. While year-to-year statistical analyses offer no insight into long-term crime trends due to the relatively small sample size, it is still unclear why there is discrepancy in the statistics presented by Kinsella, and why he would choose to use outdated statistics that seem to contradict his force’s own, more recent, data.

However, this discrepancy is a minor issue. Crime rates are not decreased by inflating the police budget, and so the issue of whether crime has increased or decreased over the previous year is irrelevant to the question of whether the police should be granted more money. But these kind of inconsistencies raise questions about the transparency of the police, as well as the diligence of members of council in questioning the claims of the police chief.

Carole McDougall, the spokesperson for the Board of Police Commissioners, argued that the increase in the police budget was in part necessary because of the findings of the Wortley report. In other words, a force that had to apologize to the African Nova Scotian community for generations of racial profiling and that has been found to be violating the rights of Black people through the street check regime is now arguing that they should be rewarded for this behaviour.

In fact, as one question from a councillor who expressed his concerns about “punishing the police for their shortcomings” made evident, when the police not only fail to do their jobs, but actively harm and brutalize Black people, it is incomprehensible to our public officials that they should be stopped from doing so or sanctioned in any way.

In what other profession can you be found guilty of illegal acts and be given more money immediately after?

Fortunately, in response to my concerns about the independence and effectiveness of Serious Incident Response Team (SIRT) investigations, Kinsella was able to assure us that SiRT is indeed independent, because the HRP member assigned to SIRT only investigates the RCMP, while the RCMP member assigned to SIRT investigates complaints against the HRP. Any concerns we might have about police investigating the police are supposed to be removed by this. This is what qualifies as an external body that holds the police accountable.

While the word “diversity” was thrown around repeatedly, the words anti-Blackness were not uttered once. The very few times racial profiling was even addressed, it was treated like an inconvenient mistake, a minor blip in the otherwise exemplary conduct of the force. There was, of course, no mention of the failure of the force to investigate sexual assault, or the number of disturbing criminal incidents involving members of the force.

I have previously raised concerns about Dan Kinsella’s history of surveillance of peaceful activists, left-wing protestors, and anti-capitalist organizers. The police also argued that a source of strain on the police budget was the Extinction Rebellion bridge protest in October. Along with the overtime hours logged by officers, Kinsella also cited “intelligence gathering” as a significant operational cost.

In plainer language, that means the police spent a lot of money spying on kids protesting climate change.

Given that, according to members of the group, a police liason from Extinction Rebellion told the police the plans for the protest weeks before the date, it is unclear what further intelligence the police needed, or whether this costly surveillance went beyond reading social media posts.

The issue of the police armoured vehicle was also raised, and the half million cost was justified by some logical gymnastics. Apparently, the reason we need the tank is because the HRP previously had access to an RCMP vehicle, and the fact that it was never used indicates why it is necessary. People concerned about the armoured vehicle being used at protests shouldn’t be concerned because the police never use it, and that’s why spending money on it was a good choice. Perhaps I just don’t understand the intricacies of fiscal responsibility. 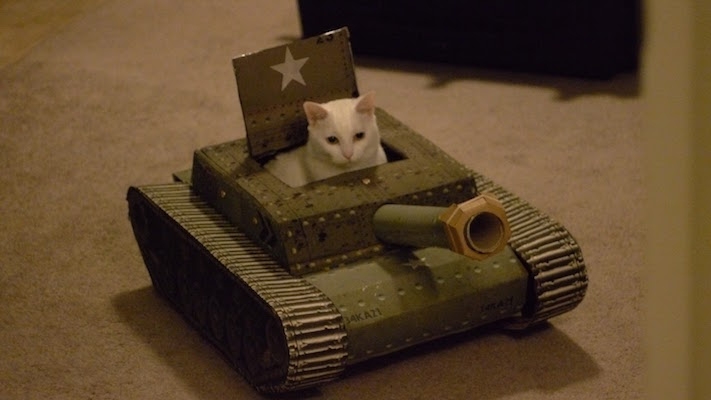 Representation of the police tank.

Since council was throwing money at police — council had previously “in principle” approved an increase of $106,300 over the 2019-2020 budget — there was a period of time when they were talking about “parking lot” items. I assumed that meant police were also asking for a parking lot — perhaps for their tank — but it became apparent that was actually a metaphor for budget items that are being put aside and assigned later. Those items consisted mostly of eight newly proposed staff positions Kinsella wants — two staff sergeants and six sergeants, at an additional cost of $669,300 next year, over and above the budget approved in principle.

My confusion is, I think, understandable, since, as predicted by former Hamilton city councillor Matthew Green (now a federal MP), the police are also asking for a new headquarters building. At the beginning of Kinsella’s term, Green cautioned that we watch for exploding police budgets, particularly in the requests for new centralized buildings and technology.

Councillors Lindell Smith and Waye Mason, as well as Mayor Mike Savage, did briefly indicate that they had expressed concerns last year when the previous chief asked for a budget increase. Mason pointed out that he had told the police not to come back this year and ask for more money. However, given the final vote, this was more like an ineffective permissive parent telling their child they can’t have a cookie before dinner, giving them the cookie, and then wondering why Danny has cavities and won’t eat his vegetables.

Mayor Savage also took time to lob another softball question at Kinsella, asking him about the Police Foundation, in a seeming attempt to allow the police to tout their charitable values. There were no critical questions asked about why private donors would give money to the police instead of giving that money to community organizations and what they might expect to get in return for their donation.

There was also no discussion of how police activities like sponsoring sports equipment, or computers, allow police access to youth spaces where they can surveil and criminalize young people under the guise of performing community service. The recent successful efforts by Black students, parents, and community in Toronto to remove police from schools laid bare how the police use youth programs to profile and monitor Black children.

Councillor Paul Russell was extremely concerned by the police using a shooting range that has signage of a gun barrel that points at people driving by. While these concerns about glorifying weapons and violence aren’t necessarily misplaced, it seems interesting that council members are more concerned with the impact of symbolic violence than they are with the actual acts of brutality against Black people.

Towards the end of the meeting, Kinsella said that if council didn’t increase the budget to include the eight new positions, he’d rework his still-increased budget to be able to include them. So council voted not to place the $669,300 cost of eight staff positions in the parking lot. But then Mayor Savage suggested an amendment that since the proposed budget increase by the police actually came in under the maximum amount, the police should receive the remainder, or $157,000.

This then prompted a discussion about the difference in staffing levels per citizen between the HRP and the RCMP. Councillors thought very hard about why the RCMP manage with fewer staff per person in rural areas, without ever seeming to consider that maybe the HRP are using their resources and staffing to profile and harass Black people. It’s almost like the Black community isn’t making this point in demanding a budget freeze.

The end of the meeting was confusing, but council first voted against the amendments proposed to offer the police extra budget and staff, which was defeated, and then voted on the original proposal. 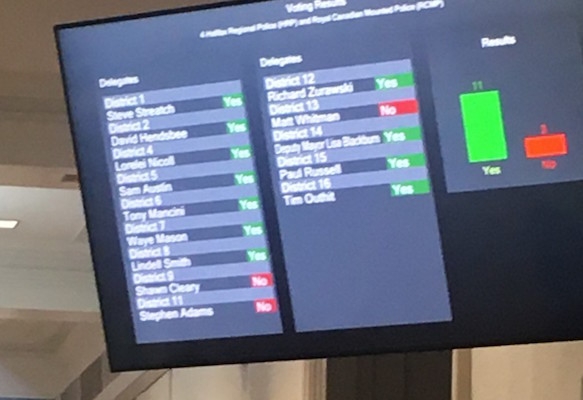 Predictably, the increased budget passed, and the police got what they wanted. I can’t say I’m surprised. Negrodamus doesn’t need a crystal ball to answer the question of what will happen next year if the police come back asking for more. No, Danny, you can’t have dessert before dinner. Well, maybe just a handful of cookies, if you promise to really, really stop racially profiling now.