Back in 2005, NSCAD grad Michelle Jospe won an award for her clever and effective redesign of Halifax Transit’s route map and bus stop signage.

Jospe’s redesigned bus stop signs organized routes numbers according to next major destination, and included a second street level sign with route and schedule information, including what connections could be made at consecutive stops. If you were to walk by a Jospe bus stop, you could see which routes were headed to say, Dartmouth, and which to Lacewood. You could also find out when the next bus was due, and what routes it would connect with down the line. 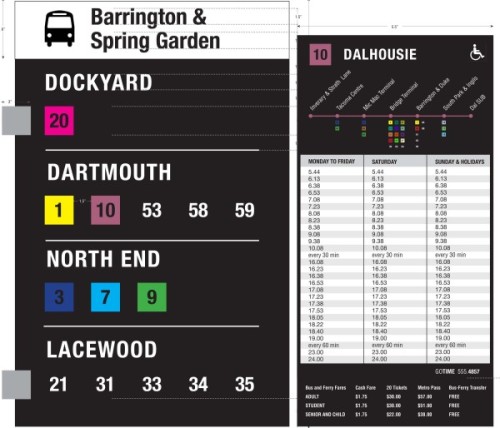 As wonderful as the signage was, Jospe’s main design triumph was solving the problem of Halifax’s congested route map. She  discarded the commonly used colour coding system in favour of black lines with directional boxes and route numbers. The result is clean and simple, and allows space for additional information, such as new express routes, or even alternative cycling and walking routes, which currently have their own map. 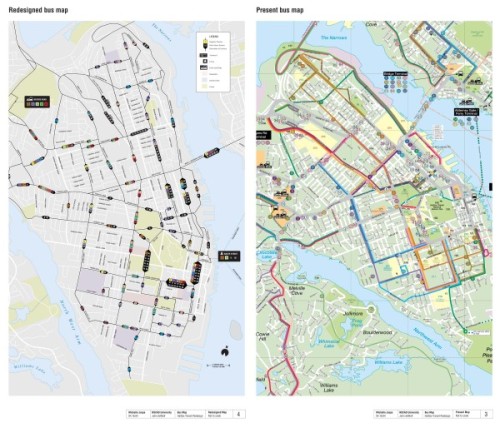 Michelle Jospe’s route map redesign, and the original from 2005.

Shortly after she won her award, Halifax Transit met with Jospe and her professor, John deWolf, to hear about how she cracked the design. But they didn’t pursue the matter further. Then city-spokesperson Lori Patterson explained at the time that there wasn’t any budget to redesign signage or the route map, which had last been reworked in 1990, to the tune of $70,000.

Fast forward 11 years, and our bus stop signs, all 2600 of them, are about to be replaced for the second time.

The first replacement happened in 2007, only two years after Jospe’s design won accolades from the Society of Environmental Graphic Design. Instead of taking the opportunity to make the signs better, Halifax Transit simply changed the GoTime prefix number and updated its logo.

The second full scale replacement will happen this summer, when we are scheduled to replace our 2,600 bus stop signs again.

A new onboard GPS system will mean the end of GoTime, and the beginning of real-time bus location system for transit riders with access to a phone. The new system means new numbers, hence the full-scale replacement of signage. 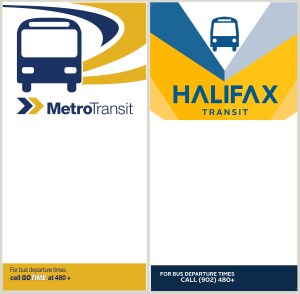 The current Halifax Transit bus stop sign, and the new design slated to be installed this summer.

The estimated cost of the new signs, says city spokesperson Tiffany Chase, is $194,000, not including “the purchase of decals, hardware for mounting, or the cost for installation.”

Chase says the only wayfinding improvements to the new signs are the fact that they will be flag mounted and double sided, to make stops easier to see for people coming from either direction. There’s “limited real estate” for changes to the signs themselves, says Chase. Jospe herself did add a second, street level sign to her reimagined bus stop, but only after vastly improving the information on offer on the first sign, which is roughly the size of Halifax Transit’s current signs.

Chase points out that Halifax Transit has squeaked in more information on buses themselves. The old “90 Larry Uteck” is now the “90 Larry Uteck via Bedford Hwy,” thanks to new technology allowing more characters on the displays on the fronts of buses.

But for the foreseeable future, it appears our brand new bus stop signs will remain sub-par.

“For a lot of people, bus systems in general are confusing, intimidating and complex,” says John deWolf, Jospe’s former instructor at NSCAD and an environmental graphic designer with Form:Media in Dartmouth. 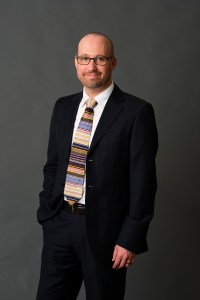 But stop signs, says deWolf, have the potential to inform, explain, and even promote the bus system.

At that pedestrian level, when you’re walking by or waiting for someone outside a coffee shop, you see this thing. If there’s an explanatory component to it that helps describe what a great system this is, and how you can get to different areas of the city conveniently on the system… I think that will encourage ridership. And I think ultimately that’s what you want.

Yes, indeed, that is what Halifax Transit wants. It’s actually what the whole city desperately needs: to increase the number of trips we are taking via sustainable modes like buses, walking and cycling, to help us avoid the catastrophically high costs of a car-centred city.

For that, we need new riders. We need folks who haven’t hopped on the bus before. We need people like my partner, who even though he won a free, year-long bus pass after participating in Halifax Transit’s latest public consultation, rarely uses the thing out of frustration and confusion. There’s a steep learning curve for new riders on the street because our bus system is built for people who already know how to use it.

“It’s a combination of making sure that the user who is already engaged in the system understands the system as a whole and is encouraged to use the system more often,” says deWolf. “And then on top of that, for new users, it’s a bit of branding and advertising. It is presenting why you should consider using the bus.”

It’s true that smartphones (with good batteries and data plans) can make even the most inaccessible transit system navigable. But they can’t promote the bus to passersby, and they can’t help us quickly figure out if the approaching #60 is heading across the bridge or over to Mumford.  A well-designed bus stop sign can do both and more.

Right now Halifax Transit has 2,600 signs that only serve to alienate new riders. We are not only wasting this valuable potential promotional space, but actually having it work against our goals.

In the coming years, when Halifax Transit’s major route overhaul starts its implementation phase, all riders will be in the position of having to find their way in a new system. We will all need better signage.

Halifax Transit needs to improve the signs we have now, and consider bringing in street level signage that will help explain and promote our bus system to both our current and future riders.