The city has set in motion an ambitious timeline to study and come up with functional design options for 2.5 to 6.5km of “transit priority corridors” on Halifax streets. That’s good news for transit riders, and ultimately for anyone who is getting stuck in vehicle traffic on the peninsula.

In a request for proposals released Monday, the city asks for bids on a project to create three functional design options for each corridor studied, with a final report complete and back to city staffers after just 4 months, by July 2017.

Bayers Road and Gottingen Street — which were the only corridors identified in Halifax Transit’s Moving Forward Together plan — will be studied for sure. Two other corridors are on the list “provisionally”: Young Street (from Robie to Windsor) and Robie Street (from Young all the way to Inglis). 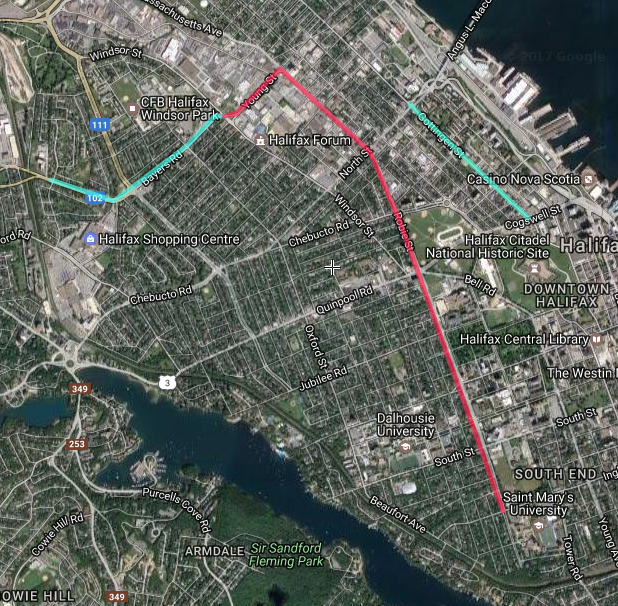 The four-kilometre “provisional” stretch along Young and Robie is on the list thanks to the nearly-ready-for-public-consumption Integrated Mobility Plan. (Consultations are due to begin April 19.) The IMP, whose staff includes Halifax Transit planners, identified a much, much nore extensive network of routes in need of transit prioritization than previously identified by Halifax Transit. 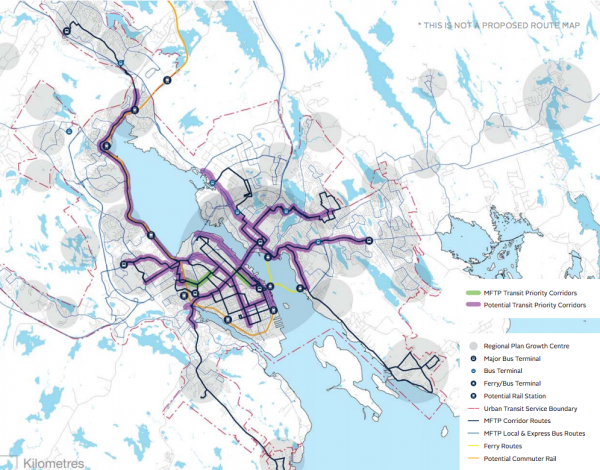 The whole idea of transit priority corridors is new in Halifax; the city is currently working its way through a list of 11 smaller transit priority measures (TPMs). Focussing on the whole corridor will mean that the city won’t just be fixing one intersection here or there, but considering the flow of the network as a whole.

Of course, that doesn’t necessarily mean bus lanes on all these streets. The RFP does not specifically define what a transit priority corridor is, so presumably it’s up to the chosen consultant to come up with the range of measures that are out there and that will fit the streets in question.

While some sort of bus-only lane is highly likely for Bayers Road, it seems far less likely for a street like Gottingen. But at this point, it’s anyone’s guess. Removal of on-street parking, specialized traffic lights, and short queue jump lanes at intersections are all possibilities. The public will get a chance to weigh in on the options, as the consultants are required to host at least one public consultation meeting.

The RFP for this study reflects something else new in Halifax transportation planning. For decades traffic engineers everywhere have used Level of Service (LOS) ratings to help plan road networks. LOS is a way of quantifying the quality of vehicle traffic flow, largely determined by vehicle congestion, speed and wait times. In this study, however, HRM is now additionally asking for a multi-modal LOS analysis, meaning that the impact to all road users will be modelled and analyzed. I have no idea if there is enough data on pedestrians and cyclists in this city to achieve this, but hey, just the inclusion of the other modes in LOS analysis is a notable progressive step for Halifax transportation planning.

The only thing that could make this RFP better news would be if Halifax was further along in its ongoing review of the municipal Red Book, the guidelines for how the city builds just about everything that it builds, including our streets.

I don’t know the exact details for what’s in store for the Red Book, just that a “project charter and phased implementation plan for the amendments” will happen sometime in the next fiscal year, which starts April 1. I do, however, know that our standard and minimum lane widths are under review as part of this process, and it’s expected that if anything, they will get narrower. And with changes to how the city organizes streets underway, that means the best time to have finished these revisions to the Red Book would have been yesterday.

Currently, city engineers are creating detailed designs for TPMs along Windmill Road (part of the list of 11 measures due to happen within the next year or two.) They are adding queue jump lanes for buses in two spots, from Seaport to Bancroft, and then from Wright Avenue to Victoria. Widening will be required, so this already extremely wide street will need to get wider.

But here’s the rub: in the absence of new, narrower lane standards, the widths on the detailed designs reflect what’s there now, 3.5 metre- and four metre-lane widths (the latter of which is wider than some 100-series highway lanes.) So because the city didn’t have the staff to complete the Red Book review this year, it will be widening Windmill Road excessively, creating longer crossing times for pedestrians, and keeping lanes wide enough to accommodate very high vehicular speeds.

Don’t get me wrong, Windmill Road at this section is no pedestrian paradise as it is. It’s seven lanes wide with no sidewalks, even though it’s a transit route. At the very least, these TPM road widening projects will include sidewalks to replace the dirt paths that current transit riders and pedestrians have carved into the roadsides. (Though the opportunity to include space for bikes, via lanes or multi-use paths, appears to have been missed.)

An updated Red Book could mean considerable savings in terms of road space not just on sections of Windmill Road, but on streets like Gottingen and Robie, where space is at a considerably higher premium. But unfortunately, there may not be time to wait for a fully revised Red Book before these transit corridors are redrawn. If Halifax is to take advantage of federal transit funding currently on offer, the city will need to act as soon as possible. But will it?

A final consultant’s report by July 2017 seems like a suitably ambitious timeline, but there will be a long way to go on the other end of that deadline. The contract for a study of the current slate of TPMs was first awarded in January 2015.  It took 15 months of back and forth with city staff and the consultants to deliver the study to council, and then a five-year implementation timeline was proposed, stretching into 2021.

Thankfully, the advent of federal funding opportunities seems to have sped up that plan.

And hopefully, the promise of federal money will continue to light a fire under HRM staff and council, to ensure that transit riders aren’t sitting in traffic any longer than they have to.