You are here: Home / City Hall / Black man arrested for being in city park after dark says he was racially profiled by Halifax Regional Police officers 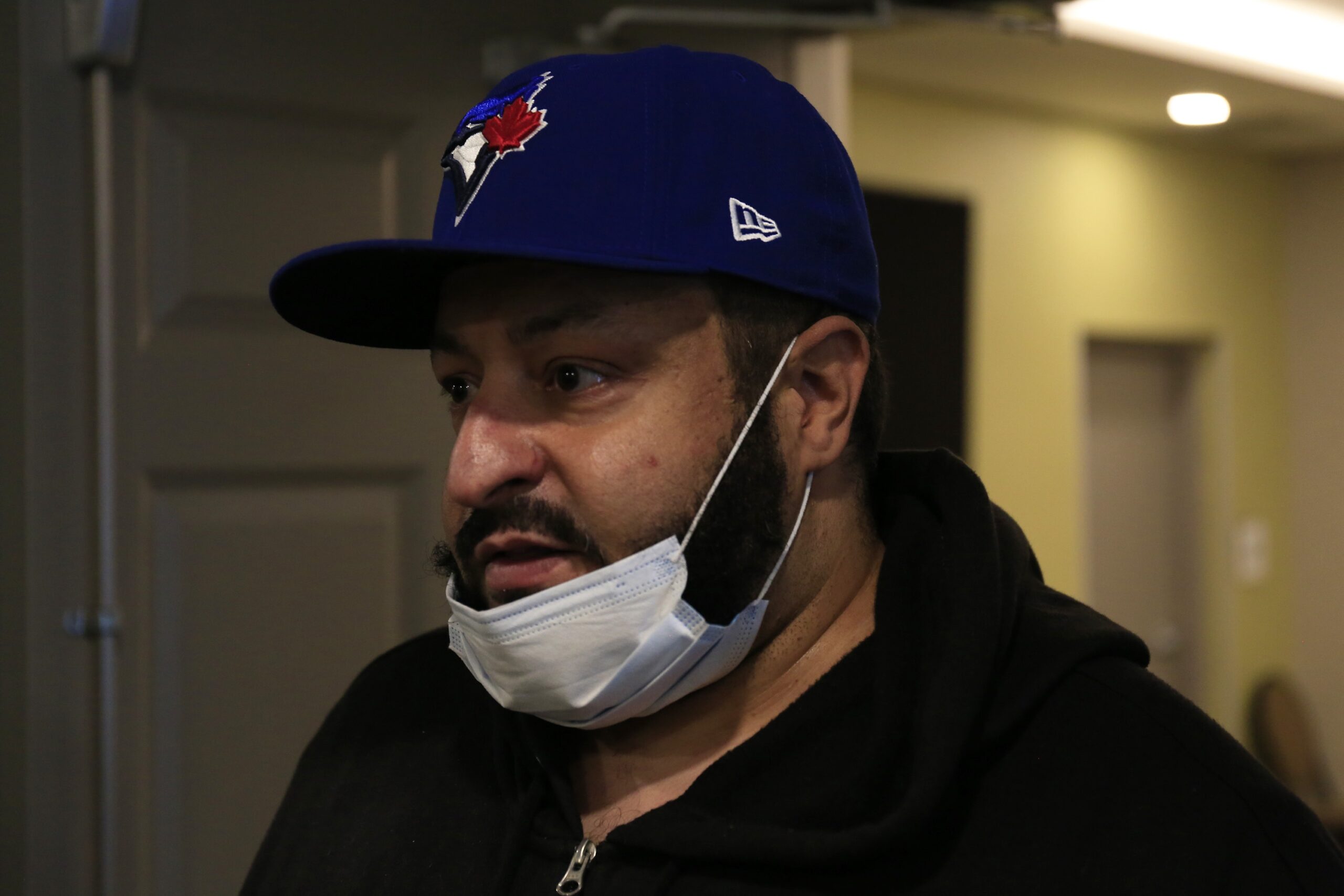 Adam LeRue speaks to reporters at a police review board hearing on Wednesday. — Zane Woodford

A Halifax couple’s complaint of racial profiling by two police officers got bogged down by legal arguments at a review board hearing on Wednesday, eventually leading to an adjournment until the fall.

Adam LeRue, who is Black, and Kerry Morris, LeRue’s partner who is white, stopped to make a phone call in the parking lot near the Dingle in Armdale around 10 p.m. in February 2018.

Halifax Regional Police constables Kenneth O’Brien and Brent Woodworth pulled up, and although there were five other white people in the park, the officers left them alone and approached LeRue’s truck asking for identification and threatening to ticket him for being in the park after dark.

“I was driving and I needed to make a phone call. I don’t talk on my phone and drive. We live in the area. I pulled over into the parking lot and that’s when I was accosted by these two cops,” LeRue told reporters on Wednesday. 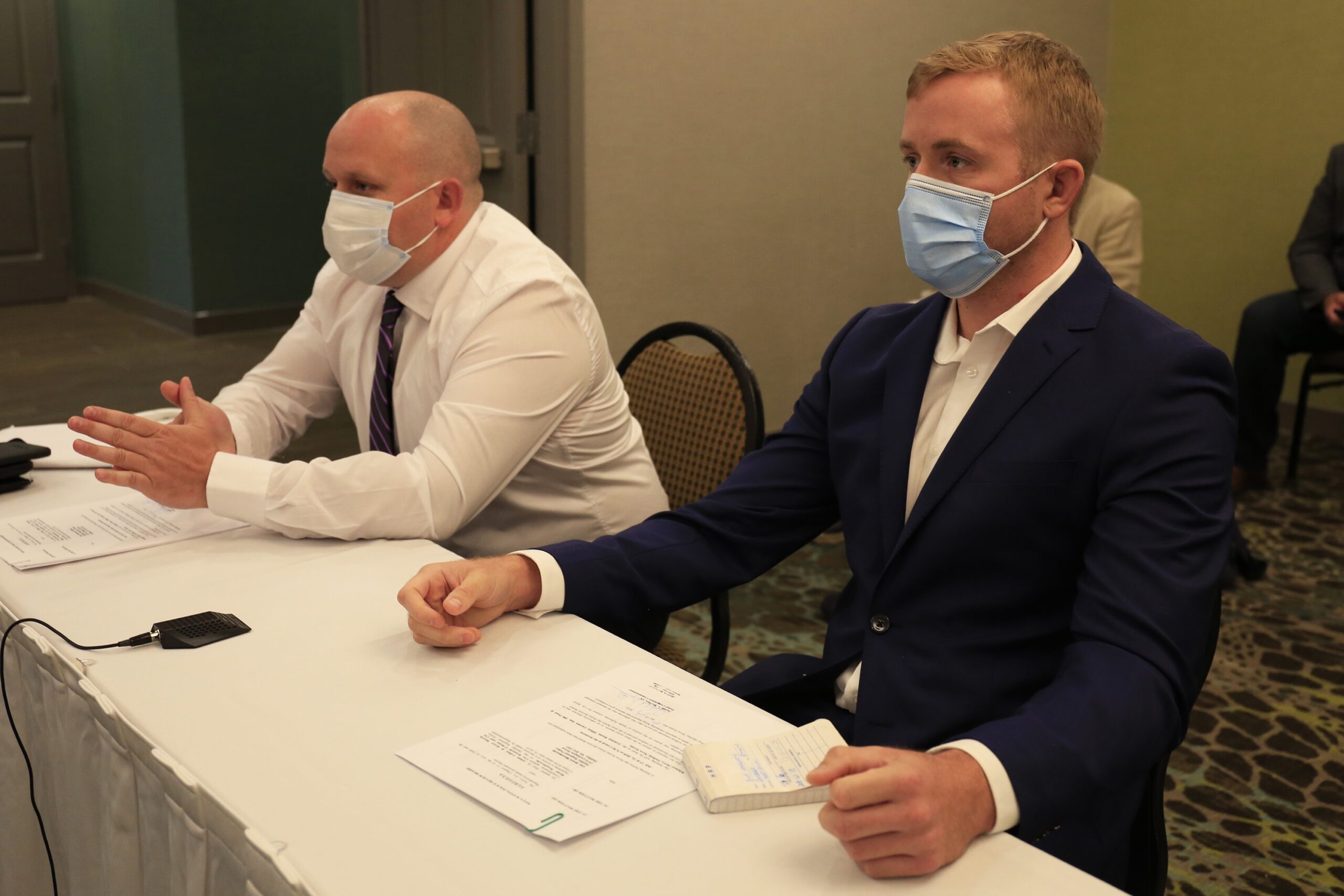 LeRue said he asked the two HRP officers to call their supervisor to the scene.

“I’ve been accosted by the police many times for nothing, I don’t even have a driving record, so of course I’m going to call for a supervisor,” LeRue said.

The supervisor didn’t come, and LeRue was arrested for obstruction of justice, and ticketed for failure to show identification and being in a park after dark.

“I was racially profiled in a park,” LeRue said. “I was arrested. Kerry was ripped out of the car and I went to jail that night. In reality, we just pulled over to use the phone and that was it.”

Morris said she was left with bruising and a sore shoulder from the force of being pulled from the truck.

“Those were my injuries, but I wasn’t concerned about myself in that situation. I was really concerned for Adam’s well-being,” she said.

LeRue spent the night in cells at HRP headquarters — where he was denied access to a puffer he needs for his asthma — and appeared in Halifax provincial court the next morning. The tickets were eventually thrown out, and LeRue said he was “scared into” a restorative justice process for the obstruction of justice charge.

“When you’re the only Black guy in a situation and you’re the only one getting tickets and arrested and your white girlfriend is with you and she gets nothing — call it what you will,” LeRue said.

“I thought it was racial profiling, but how do you prove that?”

Police delays could derail the appeal

The board started an appeal hearing into the matter on Wednesday at a hotel in Enfield, near the airport.

O’Brien and Woodworth were present, with lawyers James Giacomantonio and Nasha Nijhawan representing them. Under the collective agreement for the officers’ union, the Halifax Regional Police Association, those lawyers are paid for by the municipality.

LeRue and Morris represented themselves.

The police force had its own lawyer there too, Katherine Salsman.

“As far as we are concerned the [Disciplinary] Authority is in agreement [with] our claims and the complaint is already decided,” LeRue and Morris wrote in a letter to police dated July 15, 2019.

Nijhawan agreed that HRP took too long to investigate the complaint, but argued in favour of a different result. She argued that the missed deadline meant the police review board had lost jurisdiction to hear the complaint — meaning it should be thrown out altogether.

Salsman argued the wording of the regulations — “must” rather than “shall” — means the timelines are directive, not mandatory, and the police review board still has the jurisdiction to hear the complaint.

The board met for about 15 minutes to discuss the matter privately, and then adjourned the hearing till Oct. 8-9, asking all parties to submit written briefs on their jurisdictional arguments.

If the board decides it still has jurisdiction, the hearing will continue in October. If it doesn’t, the board will issue a written decision and the appeal will be thrown out.

Giacomantonio and Nijhawan declined to comment on behalf of their clients after the adjournment. Halifax Regional Police Association President Dean Stienburg told reporters the union supports the members and had no comment on the details of the case.

“If the board ultimately chooses they do have jurisdiction, we’re confident in the end, once the hearing is had, that our officers’ actions will be determined to have been appropriate under the circumstances,” Stienburg said.

LeRue and Morris have also filed a complaint to the Nova Scotia Human Rights Commission.

“I’ve lived here my whole life, I understand these situations because I’ve been in them before, and I think it’s just now people are starting to actually see it for themselves,” LeRue said.

“Adam has had a history throughout his lifetime of being racially profiled and street checked and harassed by the Halifax Regional Police, unwarranted,” Morris said.