You are here: Home / City Hall / Ahead by a century 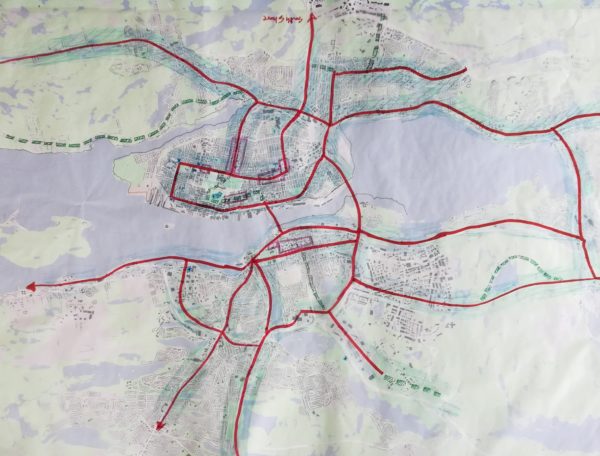 One of the preliminary transit route sketches. From leadingwithtransit.com

Listen, I wouldn’t blame you if you were done with discussing the future of transit in Halifax. We had the Moving Forward Together (MFT) plan, for which thousands of folks chimed in with their hopes and dreams for buses in the region. Then we had the Integrated Mobility Plan (IMP), and everyone played ball again, attending meetings, scrawling ideas and concerns on post-it notes, and answering surveys online. So surely now, fair citizens, you can take a couple of years off, and watch the change unfold before you.

First of all, you might not get the chance. There are decent odds that MFT and IMP will not get completed, and almost certainly not within their proposed timelines. After freezing out MFT and IMP projects from their proposed capital budget in December, senior city staff are now saying that despite council’s insistence on finding the money to pay for these projects, most of them cannot be completed in fiscal year 19/20 anyway, because the departments in question don’t have the capacity to do so. So we have the money, but we also don’t the money. (Sadly, this situation will likely also play out with the federal gas tax income coming our way.)

It’s downright infuriating news, especially coming from a senior administrator who less than two years ago suddenly and single-handedly fired the city’s chief planner, and who has publicly committed to working on securing a stadium project for Halifax, instead of, it seems, working to make sure the city has enough staff to implement the basic infrastructure projects that thousands of citizens were consulted on and that council has unanimously approved.

Secondly, when all is said and done, MFT and IMP are probably not taking a long enough view to really transform how we get around. Moving Forward Together is in the middle of its five-year-long implementation, and even the far-more-significant and wide-ranging IMP only set its sights on a 15-year timespan.

“I keep saying that long term is 100 years,” Palermo told me when I sat down with him last month. “Somebody said it should be 2060, because they say we’ll reach a population of one million in 2060. You know, I’m not sure, but there needs to be a date somewhere.”

Palermo is a founding member of Leading With Transit, a group of citizens, planners, developers, and existing advocacy groups working on a mission to “make transit the first and best choice for getting around in HRM.” The idea, says Palermo, is to think about the kind of place we want to be in 40, 60, or 100 years, and then take steps today towards it. “You can either invent your own future, says Palermo, “or others will do it for you.” 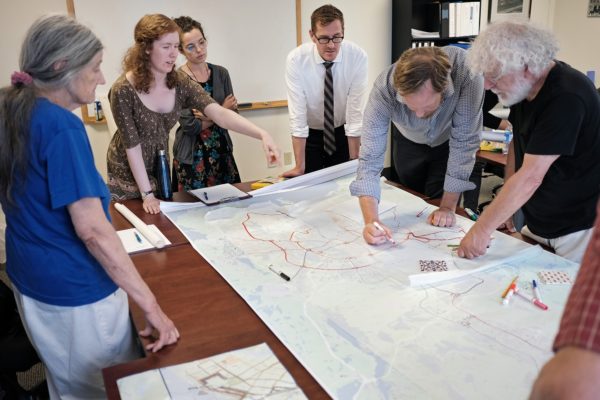 Members of the Leading With Transit concept team work together on preliminary route design back in September 2018. From leadingwithtransit.com

Much like highways and major roads have led the past century of urban planning and development, effectively creating the cities we live in today, so Palermo’s group sees the potential for higher order transit — the kind that is the “first and best choice for getting around” — leading the next 100 years.

We just need to plan for it, says Palermo.

The group is split into three task forces: concept, communications, and investment. The concept team has started to map out routes, and create a picture of what “first and best choice” transit might actually look like.

So far, the plan includes loop or U shape systems on the peninsula and in downtown Dartmouth, with “fingers” stretching out in all directions to cover suburban and even rural communities. Palermo sees rural communities included in the long term plan because by properly connecting rural towns and villages, we could concentrate rural development along these “fingers” of higher order transit, thereby sparing more of the natural environment.

“The position that I’m coming to right now is that if we develop this transit system appropriately we can actually build on and celebrate and enhance the natural environment that actually exists here… You know the topography here is amazing. The number of lakes is just amazing. It’s like this is a city built in this kind of natural paradise.”

“I think we need to respect these natural systems. The Shubenacadie canal was this amazing thing that actually goes to the centre of the city, and you know we’ve done everything that we can to hide it, obscure it, drive across it.”

On the peninsula, Palermo describes lines of on-street light rail, connecting the pinch points like the bridges, the Armdale roundabout, Bayer’s Road, and the Fairview overpass.  With a Bayer’s Road–Robie Street line all the way to Inglis Street, another along Barrington Street, an east-west line along Quinpool Road and across the peninsula, and maybe another along Gottingen Street, Palermo says “everybody on the peninsula, with the exception of a very few people in the South End, would actually be within a seven minute walk of where a public transit station could be.”

“We’re not finished and we’d like to involve more of the community in figuring out where the routes should be, and how they might work,” says Palermo. (Leading With Transit meetings are open invitation.) “We are going to try to develop it enough so that it’s tangible. So that people can actually see it, and picture it as something that’s rational, reasonable, and attainable.”

Palermo says that on-street light rail is the ultimate goal, because it offers reliability and permanence. And we do have room for it, he says.

“This idea that we need to widen streets in order to get transit on it, I think is one of the fallacies in all of this,” says Palermo. “There might be some slight widening that’s needed in a few places but I’m pretty convinced that we could sneak through a light rail system. And in the short term it might even have to be a bus system, to kind of test it out.”

After all, says Palermo, “what we want is fewer cars on the street. We’ll use the space that’s there. We should make transit such a great thing that people will willingly kind of leave their cars behind.”

One of the current projects in the under-capacity queue with the city is the Bayers–Young–Robie transit corridor, which seemingly fits in with the Leading With Transit vision. “Almost,” says Palermo. “You know I don’t think it’s bold enough. I think it’s thought of too much as a kind of through-route for transit, as opposed to the route itself becoming a transit-oriented street with development on it.”

Interestingly, Young and Robie Streets are already seeing considerable private developments, with no signs of integration into a future higher order transit system. “That’s what makes this urgent, says Palermo. “The more we wait, the more difficult all of these things actually become.” 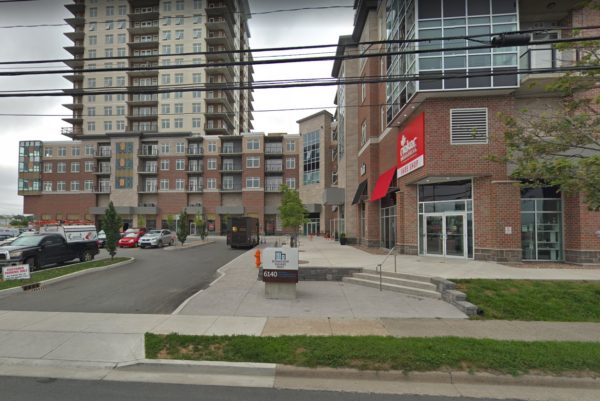 The million (or billion?) dollar question is, of course, how would we pay for it?

That’s where the investment team comes in. The Leading With Transit vision is permanent, higher order transit lines with stations integrated into streets and buildings, which will naturally create value for developers and property owners along those lines. The idea is to have those same developers and property owners subsidize building the system, so as to recover some of that private value created by the public expenditure.

Palermo points out that developers are already spending millions to integrate into the current transportation system, in the form of parking garages. “You know we’re putting in these huge holes, at great cost, and great disturbance to absolutely everything — holes that are five, six floors deep — just to put cars in. And the cost of providing one parking stall is something like 40 to 60 thousand dollars. Isn’t that insane? That’s an insane thing to be doing,” says Palermo.

On the money side there is also federal funding. “The federal government is asking for initiatives like this,” says Palermo. “And Halifax is one of the few places that I think can come up with a really large initiative. Frequently we ask for so little, because we don’t have a vision of what it is that we’re going to build at the end of the day.”