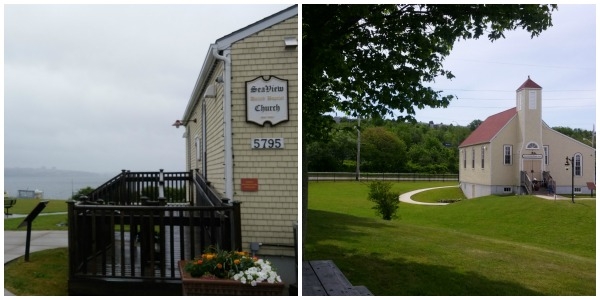 A replica of Seaview United Baptist Church houses a museum dedicated to the history of Africville.

When my kid’s school announced its annual picnic at Africville Park in June, I was pretty excited. I would finally get to see the site of Africville, a predominantly Black community founded in the mid-1800s on the shores of the Bedford Basin, which suffered under decades of racist planning decisions culminating in the infamous demolition of the town in the late 1960s to make way for a highway interchange at the foot of the Mackay Bridge (completed in 1970).

Thanks to the perseverance and tenacity of the former residents, we not only know the story of Africville, but we can walk part of the grounds of the demolished community at Africville Park, and learn about its history at a museum in a replica of the Seaview United Baptist Church, by all accounts the focal point of the community.

It’s a beautiful spot, telling an important chapter of Halifax history. Too bad it is so damn hard to get to.

Because it is so close, I decided to bike to my kid’s school picnic at Africville. Little did I know that to get there I would find myself on a 70 km/hr stretch of Barrington Street with no sidewalks, and then on Africville Road, which doubles as a throughway for large trucks coming from the Richmond Terminals, and is also devoid of sidewalks. 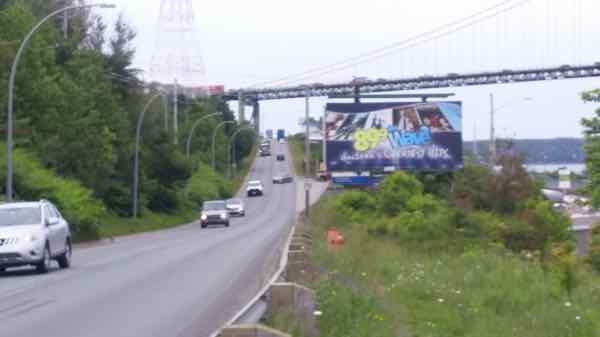 Barrington Street looking northward to Africville Road. On bike or foot, you will need to hop the guard rail to walk along a narrow path on the side of the road.

Even though it’s on the peninsula, located a hop and a skip from some of the city’s densest residential communities, you can’t really walk or bike to Africville Park, at least not safely or comfortably. Like many other neglected places around HRM, Africville Park and the Africville Museum are cut off from the city by decades of transportation planning that valued high-speed roads over pedestrian access to the point of destroying one for the sake of the other.

“Bringing people here is kind of difficult especially if they don’t drive,” says museum interpreter Nate Adams. (Even for those going by car, the site can be nearly impossible to find due to poor signage, he says.)

Barrington Street and the 111 highway coming off the Mackay Bridge form transportation moats around both Africville Park and its neighbouring but disconnected Seaview Lookoff Park. Even though it’s about 400 metres as the crow flies from the #7 bus stop on Novelea to the Africville Museum, it’s a much longer walk through the informal pathways of Seaview Lookoff which according to a city report are “not accessible, not maintained and require crossing active rail tracks.”

Last year, a group of interpreters at the museum started a petition to ask the city to construct sidewalks and bring in bus service to the site.

In a December information report requested by council in response to the petition, city staff outlined the challenges of active transportation and transit connections to Africville.

While the report seems to rule out a bus stop at the museum (“a sufficient number of passenger trips would not be generated to meet minimum ridership standards as described in the Moving Forward Together Plan” it says), it did announce the intention to include planning for improved AT connections in this year’s budget, despite the challenges of “limited right-of-way, steep slopes, significant motor vehicle traffic, and active rail tracks to consider.”

David MacIsaac, HRM’s AT supervisor says the city is aiming to hire consultants to crack some of these problems in the fall. Options could include construction of an accessible pathway through Seaview Lookoff, sidewalks along Barrington and Africville Road, and even a path heading out to Lady Hammond Road via a former rail corridor. 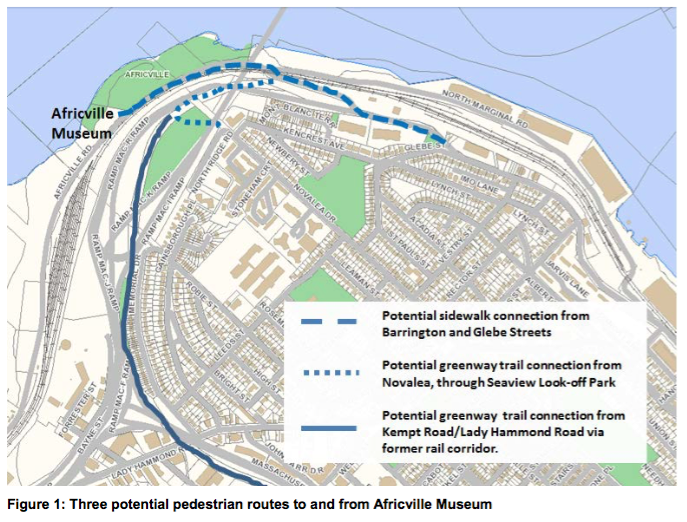 It’s heartening to see a concrete step in the direction of re-connecting Africville with sidewalks and/or greenways, but the challenges involved mean that solutions, once we see them sometime in 2018, are likely going to be expensive. And when stacked up against our still puny Active Transportation budget, they may look extravagant.

For that eventuality, I would like to propose a new capital budget category for HRM council: the Urban Renewal Remediation Fund. Take a few percentages off our current road budget, and dedicate it to righting the major wrongs of public infrastructure from the past 60 years. Knock on the doors of the province and the Bridge Commission and ask them to contribute their fair share. Then spend it. Fix the access to Africville. Throw some of it at the Cogswell Interchange. Put more towards reconnecting all the communities that have been bisected or isolated by high speed, vehicle-only roads and interchanges. (I would love to hear your suggestions in the comments.)

Do it soon, and do it fast. It will be like ripping off a bandaid. Painful in the short term, but that is the price we pay for bad planning. And when we report the costs to the taxpaying public, let’s not call them “active transportation” costs. Let’s call them what they are, the latent costs of urban and suburban highway construction — a bill we’ve been racking up carelessly for decades, and in some cases, continue to.

Let’s not prolong the pain of living in a city disconnected by our own infrastructure. Let’s fix it. Re-connecting Africville will be a great place to start.