You are here: Home / City Hall / A man gets a roof as Halifax quibbles with group’s band-aid solution to homelessness 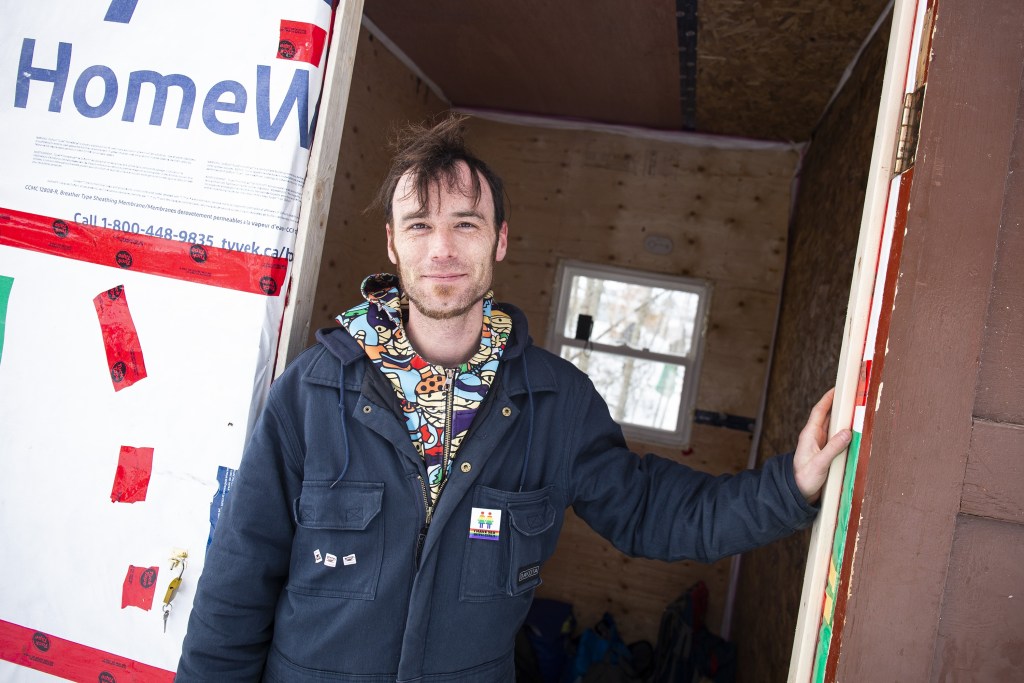 Andrew Goodsell stands in the doorway of his shelter in Dartmouth on Monday. — Photo: Zane Woodford

Andrew Goodsell got a roof over his head this weekend.

For the past few months, he’s been in a sleeping bag on park benches and outside libraries. On Saturday, he moved into one of Halifax Mutual Aid’s new shelters in Dartmouth — the second the group of anonymous volunteers has dispatched to a tract of city-owned property at the end of Shore Road.

It’s a small structure, about six feet by eight feet, resembling a shed, but with insulation in the walls and a carbon monoxide detector inside. 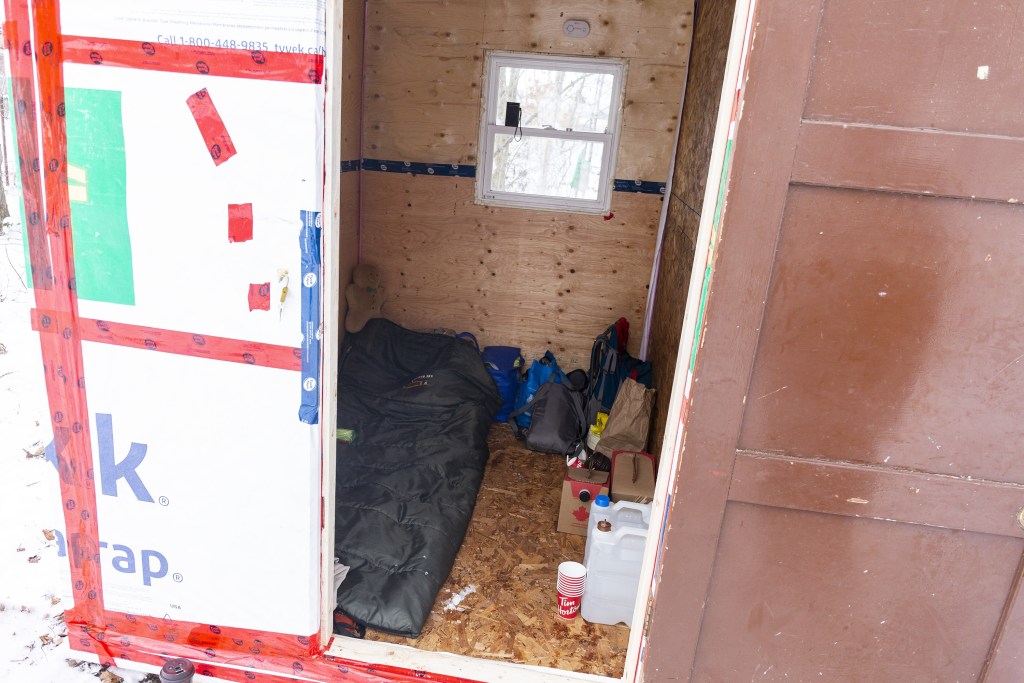 “I think it’s a very sad, pitiful way of trying to give someone a hand, but it’s the best thing that ever happened and it’s from the people, not the city,” Goodsell told reporters at a rally for Halifax Mutual Aid in Dartmouth on Monday.

“It’s a lot better than getting rained on every night and just getting beat up by the elements.”

At a rally across the street from Goodsell’s place on Monday morning, a few dozen people gathered on the Dartmouth Common to voice their support for Halifax Mutual Aid. The rally was to be a demonstration to protest rumoured action from the city against the shelters, but as more information came out, fears that the two shelters would be demolished appeared unfounded. 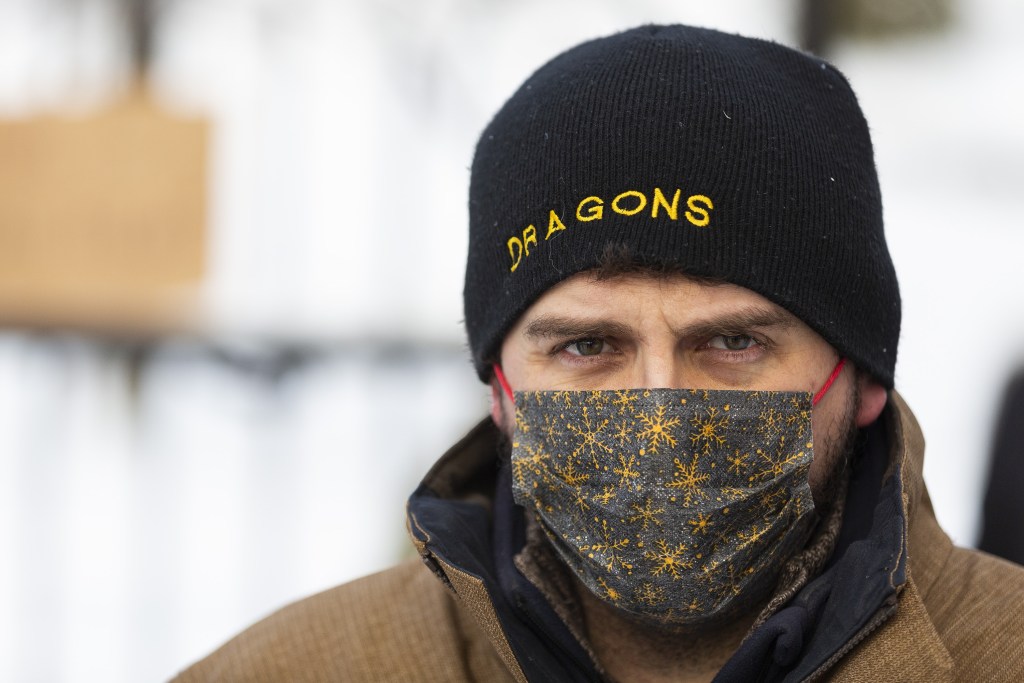 Kevin, one of the volunteers with Halifax Mutual Aid who didn’t want to give his last name, explained the situation to reporters:

We are here today because on Saturday we put our second shelter down on our same site with the permission of the current resident on the land and … yesterday afternoon, a local street navigator sent us word that the CAO and the city were going to remove both structures. There was no mention about it being occupied or not. We fairly quickly came down to make sure nothing was happening. The two shelters are occupied. The second shelter was empty for a few hours until the second occupant, who agreed to go in, could make it there.

We don’t understand why the city is taking, seemingly, a combative role against us when only a couple days ago they showed words of support and compassion. I myself slept here overnight in a tent to make sure nothing happened.

On Friday, the CBC’s Elizabeth Chiu reported that a man named Paul had moved into the first of the two shelters on the site and the municipality wasn’t planning to evict him. 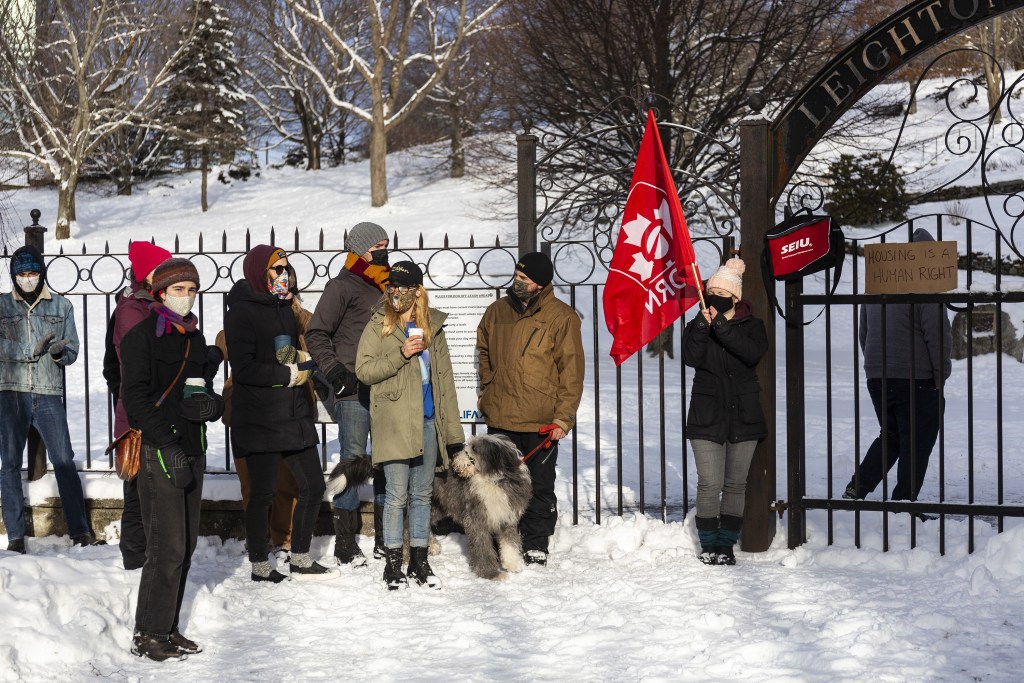 A few dozen people gathered for a rally in Dartmouth on Monday to support Mutual Aid Halifax. — Photo: Zane Woodford

Dartmouth Centre Coun. Sam Austin tweeted, “HRM isn’t demolishing anyone’s shelter. Paul isn’t being moved. HRM isn’t forcibly evicting anyone. Mutual Aid, however, dropped off 2nd shelter Saturday where no one was staying. It was empty. HRM will remove the empty one. If it’s no longer empty, it will stay.”

Halifax Peninsula South Coun. Waye Mason tweeted, “I assure you if it is occupied it will be left alone, but can I ask you to deliver them to existing encampment sites? Please contact Councillors and Street Navigators we will help with this. Please do not drop them speculatively around the municipality.”

Kevin said the shelter was already spoken for when it went out on Saturday, and it’s the group’s policy not to put them out before they have an occupant ready to move in.

Dubé tweeted, from his locked account, “We want 2 work with the Mutual Aid Society regarding options going forward. HRM will never “evict” homeless people from a temporary shelter nor have I ordered such a measure. We work with the homeless through our Navigator program & other social agencies to find safe solutions.” 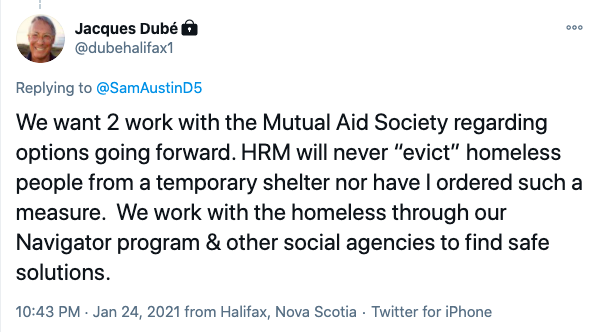 The municipality issued a statement Monday morning. It reads in part:

The municipality is aware of the installation, by Halifax Mutual Aid, of two temporary shelters on municipal property in Dartmouth. As per our established protocol, individuals experiencing homelessness will not be evicted while we seek to identify alternate options for adequate housing. While the installation of structures, including temporary shelters, on municipal property is not permitted without approval, the municipality aims to work with Halifax Mutual Aid to identify alternate options for those experiencing homelessness. By working together on our common goal to address homelessness we are confident that solutions can be identified in the short-term and the long-term.

Halifax Mutual Aid is concerned about a lack of clarity when it comes to occupied vs. vacant shelters.

“We know that there’s a tradition in cities of city officials, police coming and finding vacant tents and taking their tents and belongings away. This is a very common tactic,” Kevin said.

The Halifax Examiner has asked the municipality how long a shelter has to be empty before it’s deemed to be vacant. We’ll update this article with the response.*

“That’s a very important clarification that we need to have,” Kevin said. “The communication has been very unofficial. They say they’ve reached out to us. To my knowledge they have not.” 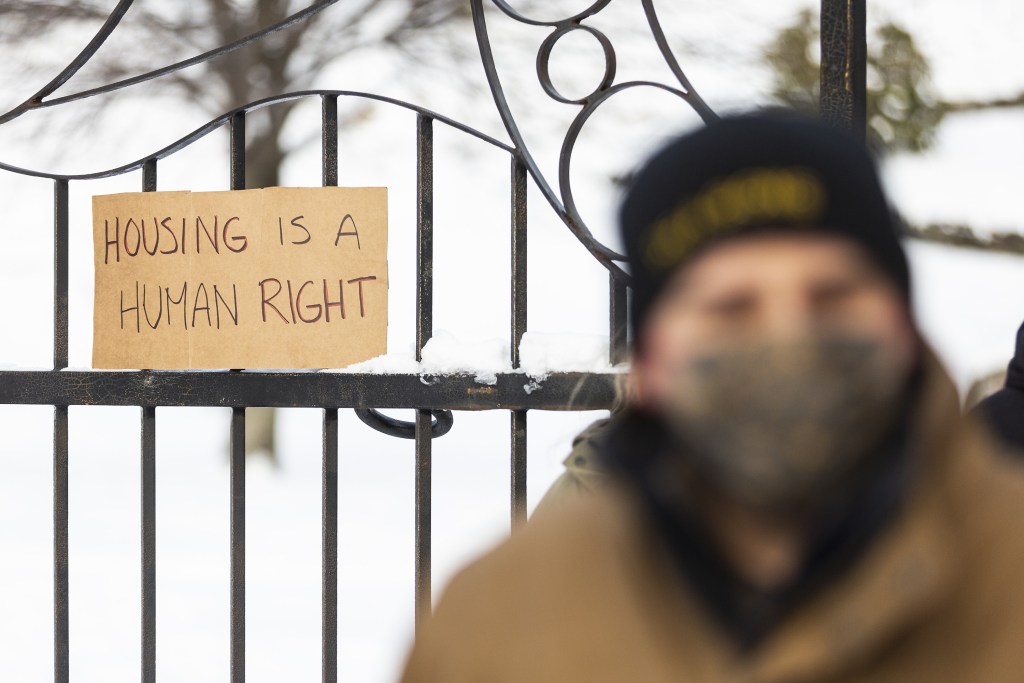 A sign reads, “HOUSING IS A HUMAN RIGHT,” behind Kevin, a volunteer with Mutual Aid Halifax, as he speaks to reporters in Dartmouth on Monday. — Photo: Zane Woodford

If the city doesn’t like Halifax Mutual Aid’s approach, Kevin said it should house people.

“This is really the only true band-aid solution that anybody has done in this city for years. This is not a long-term solution, but this is getting people out of the cold,” Kevin said.

“I’ll be clear, these are not to code. There is no code for this. These are built by builders and people who know. They’re very solid. But it’s also a moot conversation because if you say, ‘That’s unsafe,’ but you’re perfectly fine with someone sleeping under a tarp on a bench, under a dark underpass or in a tent, then I have to ask where your priorities are.”

While grateful to be out of the elements, Goodsell wants more than a band-aid:

“I want a real solution. House me. I want to get back to work. I want to wake up, have a hot shower, eat a meal.”

The response did not answer the question. Spokesperson Maggie-Jane Spray wrote:

The temporary shelters that were installed in Dartmouth cannot remain onsite indefinitely and will need to be removed. Staff are working with partners to identify adequate housing options for these residents.  Under municipal legislation, there is no ability to permit installation of housing structures, including temporary shelters, on parks, streets and other municipal  infrastructure.