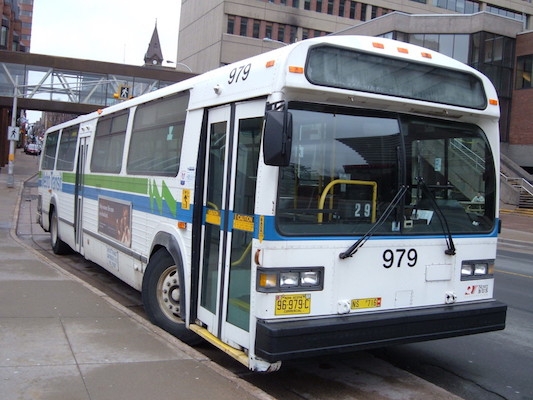 A Halifax Transit bus driver left his job Friday after being accused of child luring.

The same driver was one of two drivers accused of child luring two years ago; in that instance, an investigation by Halifax Transit was ended because it was inconclusive.

The recent accusation came after a self-described “creep catcher” named Reggie Cameron posted a video on Facebook of his confrontation with the driver, who went by the pseudonym “Kirk Sangster.” That video was brought to the attention of the transit union, which immediately notified both transit management and the police.

“I can confirm that we received a call at approximately 9 a.m. this [Friday] morning and are investigating a man in relation to luring a child via computer,” police spokesperson Wendy Mansfield confirmed to me Friday afternoon via email. “I know that you realize this but we’re unable to discuss the details of an ongoing investigation to protect its integrity and we can’t confirm the name of an individual under investigation; we wouldn’t release the name unless charges are sworn.”

In this article I will refer to the former driver as Sangster, although that’s not his real name. Partly that’s because I have not been able to talk to the former driver, but also because of the murky nature of the allegations and Cameron’s questionable tactics.

I called Cameron Saturday morning. He told me that he is 27 years old, lives in Dartmouth, and works as a part-time labourer. He said he’s been inspired by “Creep Catcher” websites, and is especially fond of videos posted by a Toronto man named Justin Payne.

Creep Catchers pose on social media as young girls, and wait for men to contact them for sex. Then, the Creep Catchers arrange a meeting with a man and confront him, posting the video online for the purposes of public shaming.

Cameron told me he has posted two videos. “The first one has over 40,000 views as of right now,” he said.

In the case of the bus driver, Cameron posed as a 15-year-old girl on the dating app Skout. Skout allows users to be as young as 13 years old if they have parental approval. In Cameron’s case, he posed as a girl whose posted age was 23, but whose first post was “Messed up my profile, I’m only 15.”

He said that he was soon contacted by Sangster, and within hours the conversation went to an arranged meeting. Writes Cameron on his Facebook post:

In almost 50 pages of chat logs he tells what he believes to be a 15 year old virgin he wants to take her to the beach, asks her to wear yoga pants so he can slide his hand in and rub her bum, he wants to fondle her breasts and touch her pussy. At one point he tells me this has to stay a secret cause he could get in trouble. He asks for pics of her in a bikini to jerk off, which of course i didn’t do. To top it off, he sent what he believes to be a 15-year-old a video of himself jerking it.

Sangster says merely, “get away from me,” and runs off.

“Creep Catching” is problematic for several reasons. Besides potential danger to himself should the accused person get violent, the creep catcher could be interfering with a police investigation, or could be falsely accusing someone or naming someone as a criminal who isn’t contravening any law — in Nova Scotia, for example, a 15-year-old can legally consent to having sex with a 20-year-old.

(A recent edition of the podcast Reply All explored a parallel shaming practice in the United States called “Stolen Valor,” which publishes videos of people being publicly accused of falsely claiming to be veterans. In one such case, a 75-year-old man, an actual veteran, was accosted and followed for two blocks by two men screaming “Stolen Valor!” The veteran had recently had a heart attack, and feared he would have another, right on the spot.)

Arguably, such tactics should be reserved for people who have the legal authority and the legal and ethical training to conduct them.

“If a citizen has knowledge of a person luring a child online, we would prefer they contact police so we can conduct a thorough investigation and properly collect and preserve any evidence,” says Halifax Police spokesperson Lauren Leal in an email. “The person arranging the set up could be putting their safety at risk by creating a situation where they could be involved in a physical altercation.”

Cameron admitted to me that the police don’t endorse his tactics, but said he is careful — he tries to find out as much as he can about the men he accuses by searching Facebook and other social media. He said he believes Sangster is 43 years old.

Cameron also admitted he made a mistake: After posting the video of his approach to Sangster, he also posted on Facebook the names of Sangster’s wife and children.

“That was wrong,” Cameron said. “No one is more disappointed of him than his wife and kids. If I had one thing to say to the community, it’s ‘Please don’t harass his family, they’re suffering enough.'”

It’s clear that police are now investigating Sangster, and time will tell if Cameron’s actions help or hinder the investigation.

There’s more to this story, however.

Ken Wilson, the president of the bus drivers’ union, confirmed to me that Sangster and the other driver were the subjects of a management investigation, but that the investigation was dropped as inconclusive.

The two drivers who allegedly wrote the texts were targeting “girls from group homes,” a source tells me. I’m granting the source anonymity because the source fears retribution.

The source tells me that the two male drivers had a relationship with the girl that started when she was 15. The three would meet at the transit garage after the last shift of the night.

According to the source, the girl’s story was discounted because it was felt she could have falsified the texts.

“If they go back and read those texts from two years ago, they’ll implicate [the second male driver],” says the source.

I asked the city directly about the past accusations and specifically if in that instance police were contacted, and received the following email response from city spokesperson Brendan Elliott:

It has come to our attention that a Halifax Transit bus operator is being investigated by police. Halifax Transit is taking these allegations seriously, and will co-operate fully with police on any criminal investigation.

Halifax Transit is also conducting its own internal investigation into the matter, as per normal protocol for any situations of alleged employee misconduct. The employee is currently not in the workplace pending the outcome of the investigation.

We can’t comment any further while the investigation continues.

I’m not at liberty to answer your questions relating to an employee’s past behaviour because that would be a breach of the person’s right to privacy. Generally speaking, I can tell you we take every allegation we receive relating to an employee seriously and will, if warranted, launch an internal investigation of our own to determine if our best practises have been followed and/or need to be improved.