You are here: Home / City Hall / A Dartmouth artist went ‘rogue’ with his second guerrilla road safety project. The city called the cops 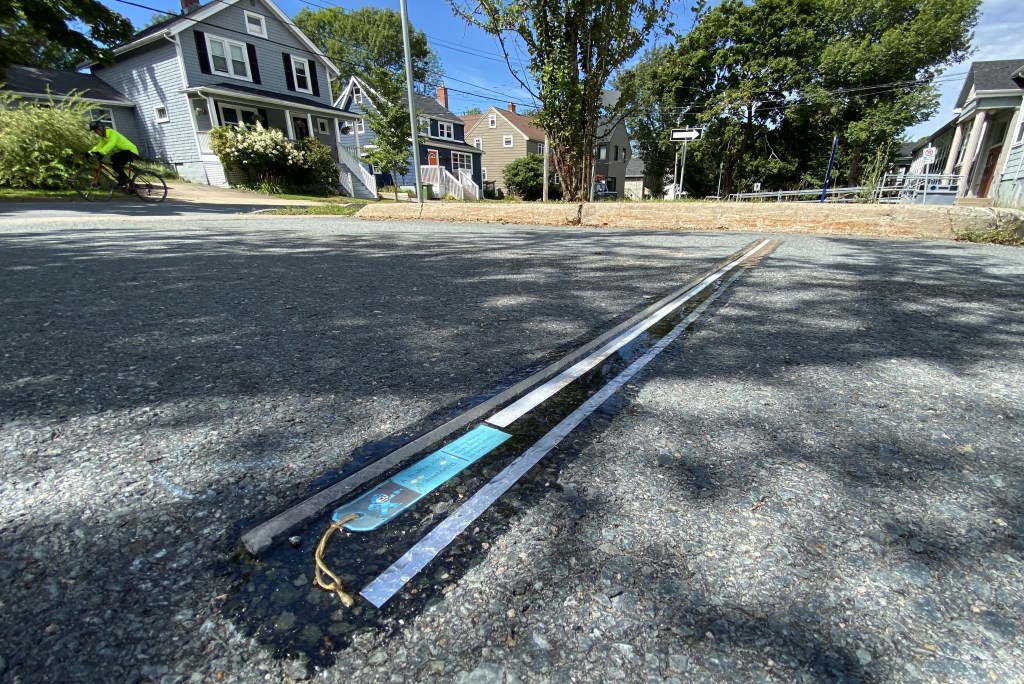 A Dartmouth artist’s second guerrilla road safety project has caught the city’s attention and this time, they called the police.

Doug Carleton — known on Twitter as PewPew, @StreetArtNS — spent much of the last year working on a new kind of speed bump, and last week, he installed one in the parking lot of the city-owned Findlay Community Centre in Dartmouth.

Carleton made headlines last year with his 3D crosswalk on nearby Erskine Street. Painted under cover of darkness, the design was meant to highlight the crosswalk in an area where speeding is a known issue.

The city didn’t share Carleton’s enthusiasm for the project, and removed the paint. 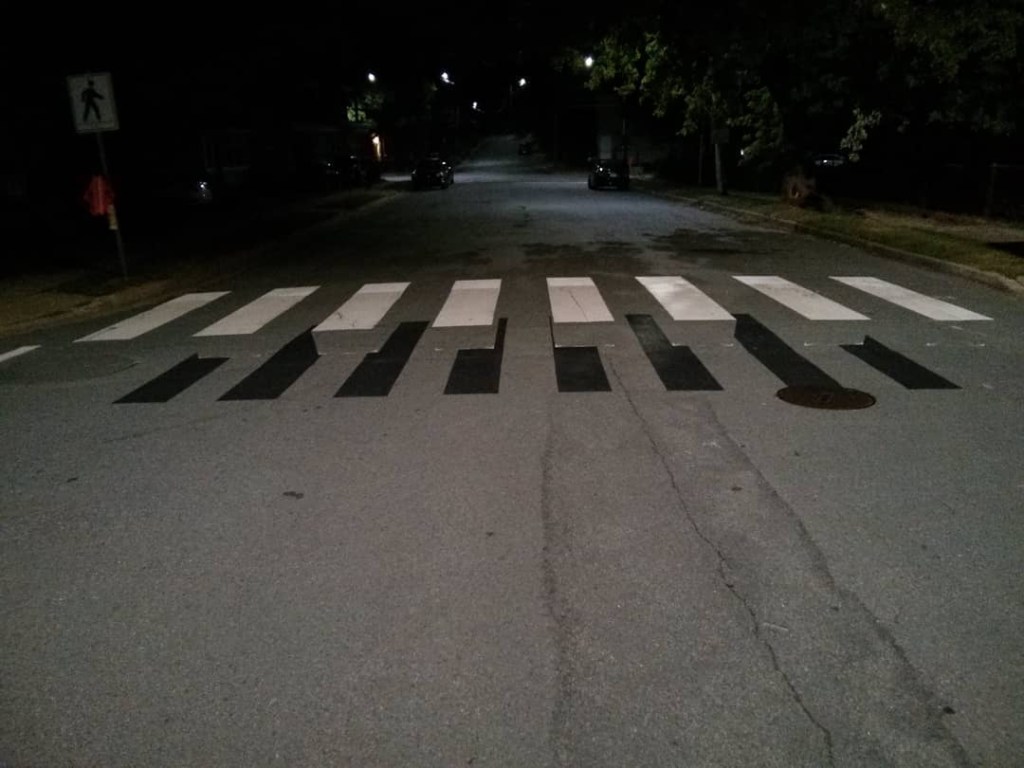 A few months later, an incident in front of the elementary school around the corner got Carleton thinking again about doing something about road safety in the neighbourhood.

“I woke up one morning, and I look out my window and there was an ambulance and some cop cars around, and it really freaked me out because I live reasonably close to an elementary school,” he said in an interview last week. “And sure enough I found out later, that a child had been struck.”

Carleton started working on a prototype for a new kind of speed bump in his backyard.

“I went about it very carefully. I was not about to just throw something out in the middle of the street,” he said.

He tested the prototype through the winter by hitting it with a hammer and freezing it and hitting it again. By spring, he was comfortable it could withstand the abuse of winter and hopefully snow plows.

Last week, he installed a speed bump on the one-way exit driveway of the Findlay Community Centre parking lot. The parking lot doesn’t see much traffic, but Carleton said it gets enough to test the bump, and it gets plowed.

“It’s kind of the perfect location for this thing to prove that it can stand up to a snowplow, which is pretty much the only thing left from it being road-worthy,” he said.

The bump is made of an epoxy that Carleton said is five times stronger than concrete. “It’s really well-suited for roadways and it has been used for roadways in other places.” Under the epoxy, there are strips of aluminum foil tape and reflective tape. As Carleton shows in a video posted to his YouTube channel, the reflective strip highlights the bump at night.

“Everything that I’m trying to do here with this, and I realize it’s like six different ideas in one, all these things have been tested and proven for the application I’m using them for, they’ve just never been used in this way before,” Carleton said.

Carleton has driven over the bump himself. He describes it as a “very modest bump,” like running over a few small rocks. Ultimately, Carleton wants to see the design applied to crosswalks, with two bumps that a driver would feel.

“If they were at crosswalks, if you had that little bump there, it would start drivers actually slowing down a little bit as they approach crosswalks,” he said.

“My hope, if I couldn’t get these all over HRM, would be that we could disperse them evenly enough over HRM that you elicit sort of a Pavlovian response in drivers … People would get in the habit of slowing down enough that they could save somebody’s life if they didn’t happen to see them going into the crosswalk.” 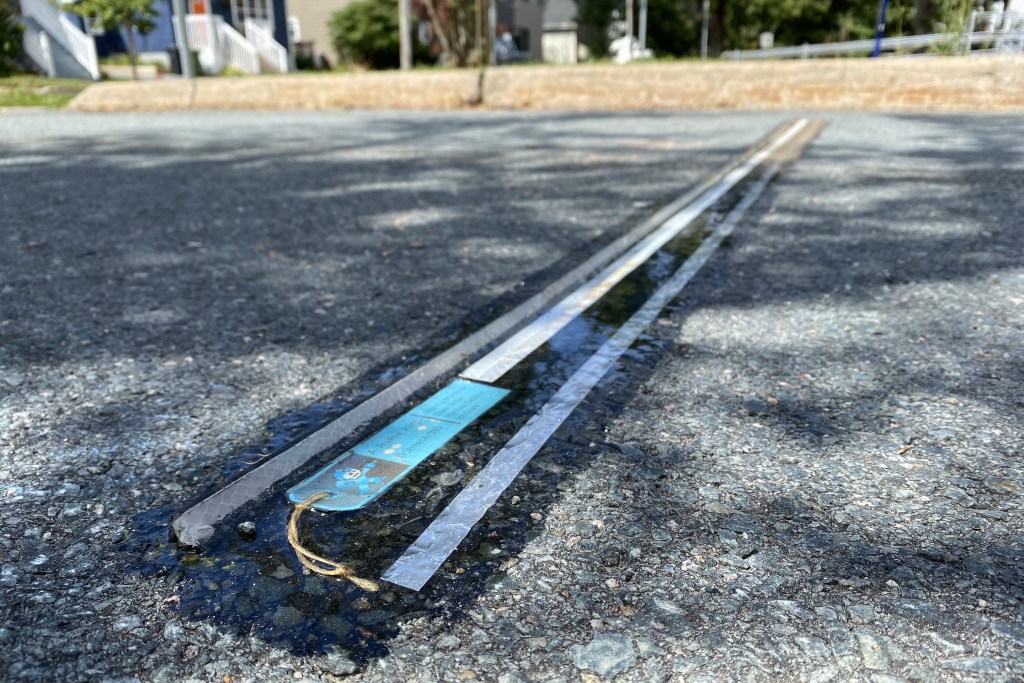 Carleton glued a big tag into the speed bump, thanking the people who helped pay for it and taking credit for it — “A PewPew Joint.”

“I believe in it enough that I’m OK getting in trouble for it if that’s what the end result happens to be,” he said.

“I honestly believe this is a really good idea that could save a lot of lives, and it’s going to crush me if people look a gift horse in the mouth a second time around.”

Asked why he keeps creating these road safety projects that get him into trouble, Carleton said he doesn’t know. But since creating the 3D Crosswalk, his eyes have been opened to the road safety issues in the city, and the provincial government’s rigidity in rules like residential speed limits.

“I got indignant about the fact that everybody has been trying for so long to get these rules changed and nobody has seemed to do anything about it,” Carleton said. “And I guess that anger coupled with when the child got hit, I just said ‘Screw it, if nobody else is going to do it, I’ll do it myself.’”

The councillor for the area, Sam Austin, was supportive of Carleton’s 3D crosswalk last year. He’s not feeling the same way about the speed bump.

“This is the second time he’s gone and modified the city’s infrastructure. We can’t have people just going around and installing speed bumps wherever they want. That would not make our city a very safe place to be,” Austin said in an interview on Monday. 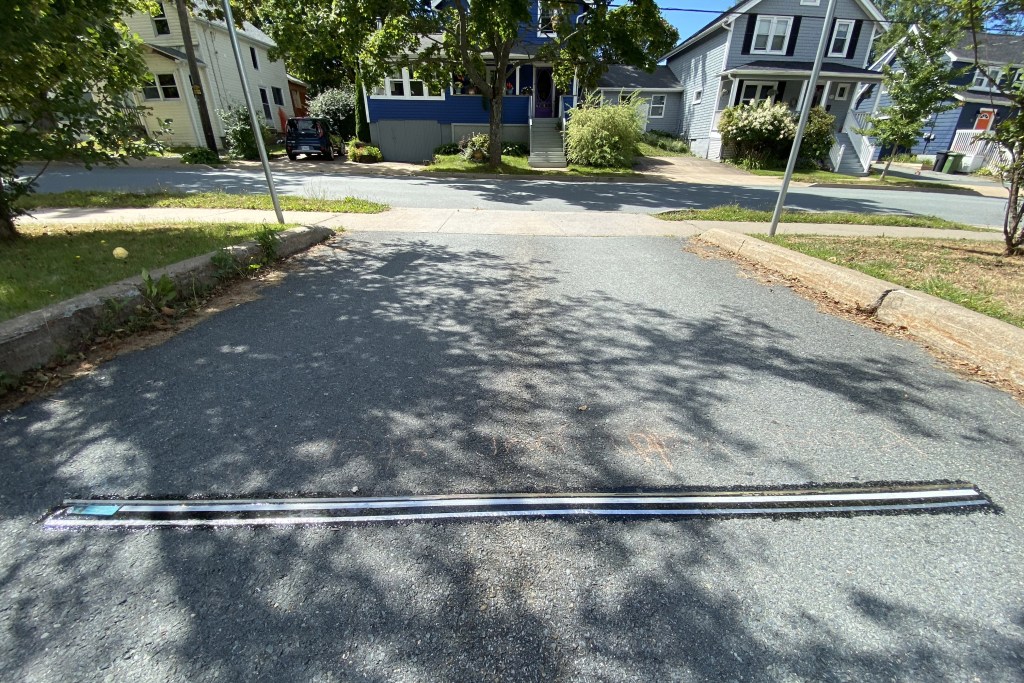 Austin said he found out about the speed bump last week, when municipal staff told him someone had “vandalized” the parking lot at the Findlay Centre. He hadn’t looked at it himself yet.

While he doesn’t think anyone wants to punish Carleton, he said the municipality has notified the police.

“It has to escalate at a certain point,” Austin said.

“The matter has been investigated and concluded with not further police action required at this time,” MacLeod said in an email.

Asked to confirm that the municipality reported Carleton’s speed bump to the police, and whether municipal staff planned to remove it, spokesperson Maggie-Jane Spray said in an email Monday, “With the safety of residents as a top priority, municipal staff are currently reviewing the situation. A decision on next steps will be made in the coming days.”

Carleton has started a petition, hoping to get enough support to keep the speed bump in place.

Austin said it looks like it won’t be easy to remove, and may required specialized equipment.

Asked what it says about the city’s infrastructure that citizens are taking road safety into their own hands, Austin acknowledged that people are unhappy.

“There is frustration out there with, we’ll say, pedestrian priority and speeds in our roads, no question about it,” he said.

“I’ve never, ever had a complaint about the Findlay Centre parking lot, ever. This isn’t a response to a specific need. This is someone who’s using the parking lot as sort of a prototype, proving ground for something that he wants to pitch for other places. And you can’t use public property as your own personal testing ground. That’s not how things work.”

Austin said Carleton has been made aware of the city’s placemaking program, where artists can sometimes use the street as a canvas. But Carleton doesn’t think this project applies.

“I got a little fancy with the signature on it,” Carleton said. “But it’s not an art project. This is roadworthy, as is.”