Skip to content
Home » Black Nova Scotia » Stories from the hood: musical with all-Black cast takes the stage in Halifax

A musical featuring an all-Black cast will premiere Thursday night at the Lighthouse Arts Centre in Halifax.

The play is based on the real-life journal entries written by at-risk youth from the Jane and Finch neighbourhood in Toronto. Taylor said five years ago Kayla Borden, who’s a board member with the association, approached her about a play someone wanted them to consider producing.

“When she sent it over to me it was a graphic novel by Curtis Bell. And I went through it, and I said, ‘Kayla, this ain’t no musical,’” Taylor said in an interview with the Examiner. “I thought it was already a script.”

Curtis Bell is an educator and former CFL player from Hamilton, who in 2009, started a mentorship program where he took at-risk kids from Jane and Finch to a First Nations reserve in Hamilton.

“He was trying to help them get back to their youth,” said Taylor.

Through the program, known as 9 Heavens Healing Academy, Bell took 40 kids aged 12 to 17 involved in Blood and Crip gang culture on 80 weekend retreats over the course of four years.

The program was said to have been responsible for quashing many rivalries among the youth and helped restore their lives. The kids were encouraged to journal and share their stories of anguish, triumph, worries, and fears. Bell published his graphic novel, Hood Habits, in 2016.

“So what the graphic novel is, it’s a compilation of their journals and their stories of what happened to them,” Taylor said.

One of the accounts depicted in the book is about a Black male youth who police suspected of possessing drugs and being involved with gangs. Police raided his mother’s home where he lived. Taylor said that after the boy was called the n-word by police, his mother, who was wearing only a t-shirt and underwear while being held on the ground by cops, asked a police officer if she could put on some pants, only to be told, ‘Stop your noise, you stupid bitch.’

“I was reading this thing and I was crying. I was disgusted, I was not shocked, I was just perplexed,” Taylor said.

“These are real stories that nobody wants to admit happens.”

“That’s why when I was considering taglines [I came up with] ‘A ground-breaking musical that does not play it safe,’” Taylor said. “[Bell] said, ‘When you write this, do not play it safe.’”

Taylor decided she wanted to develop the book into a live musical. She was accepted into a writers’ camp in Sackville, NB where actors read and helped the writers develop their scripts.

With just a synopsis and 10 scenes in mind, Taylor said she locked herself in her room for the two-week duration of the camp and emerged with 52 pages of script by the time she left.

“What stood out about Flex was that they saw the most potential in Flex at the time,” said Taylor. “So Flex’s actual story, of what they know, is that as he was in the camp (and) he actually did change.”

“And when he left they actually paid for one year of university for him. And then after that one year — they call it ghost, he went ghost — so they don’t actually know what happened to him to this day.”

Harmony Adesola plays the role of Flex, described in the script’s synopsis as “a gun-totin’, drug dealin’, 14-year-old wannabe rapper/tap dancer” who “has witnessed one too many drive-by shootings and hits on his crew.”

Originally from Nigeria and raised in South Africa, Adesola moved to Canada about four or five years ago where he first started acting in high school, then in university.

“This is my alley. I always love to challenge myself in different aspects, and this has been a challenge but we’re almost there,” Adesola told the Examiner after the first full dress rehearsal this past weekend.

Deryl Amenya, who is originally from Kenya, plays the story’s main antagonist, Flex’s uncle Shamus, a drug kingpin and pimp.

“I make the play actually have meaning in the sense of I’m the primary cause of problems in the society, which is ironic because it contrasts my personality,” said Amenya.

“The reason I love this role is because it’s important to show the spikes in the roses and, I mean, I’m the spike. So I gotta play the spike. I gotta stand out in that sense.”

Kailin Glasgow will play the roles of both G-Pops and Coach Carl (seemingly loosely based on Bell, the graphic novel’s creator) and Natasha Thomas, who plays both the role of a queer man named Loverboy as well as Flex’s mother, Donna Taybell.

Tickets are currently on sale for Hood Habits, which opens on August 25 at 7pm and runs Friday, August 26  at 7pm with matinees, August 27 and 28 at 2pm at the Lighthouse Arts Centre. 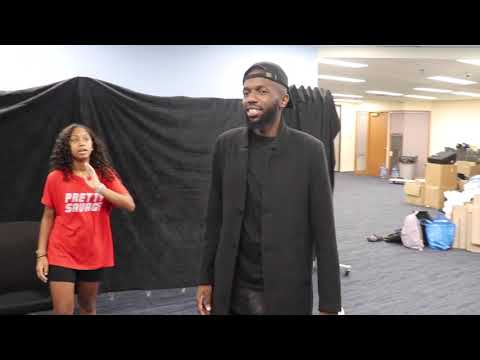